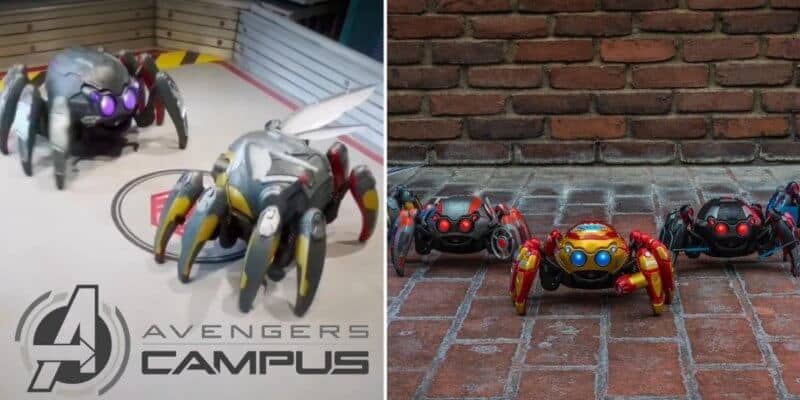 The Avengers Campus is opening in less than two weeks, and MCU fans are eagerly anticipating all the superhero fun that awaits them inside this new Marvel land in Disney’s California Adventure. So far, Disney has shared some mouth-watering sneak peeks inside Pym Test Kitchen which features an ‘enormous’ dining experience. Even Disney fans have captured their own sneak peeks watching Disney test the Quinjet!

Marvel fans are in for the mission of their life on June 4 when they can purchase all-new WEB Tech accessories for the incredible Spider-Man mission WEB SLINGERS: A Spider-Man Adventure attraction and adopt a Spider-Bot to battle other opponents inside Avengers Campus! Recently, Disney snuck inside Disney’s Web Suppliers Store in Avengers Campus and experienced the first-ever Spider-Bot battle in the ring.

After Guests have eliminated a spider infestation inside the newest superhero attraction WEB SLINGERS: A Spider-Man Adventure, Spider-Bots are waiting to become your best friend while attacking a day in Avengers Campus.

Since Avengers Campus was originally slated to open last summer, some Disney fans were able to snag the original Spider-Bots seen around Downtown Disney a few months ago, but now these advanced robot critters will be found exclusively inside Avengers Campus and will be able to transform into your own favorite Marvel Superhero as Disney Parks Blog states,

Every Super Hero needs a friendly sidekick to help protect their neighborhood. Spider-Bots place YOU in the driver’s seat, allowing you to command your Spider-Bot and battle opponents, with programmed combat and defensive abilities.

Black Panther VS The Wasp

Inside Web Suppliers, Guests who purchase their very own Spider-Bot will be able to invite others to a challenge inside a ring and showcase their superhero powers! Check out this amazing face-off between The Black Panther and The Wasp that Disney Parks shared on Tiktok as they share,

Who do you think will win this Spider-Bot battle? ? #Disney #DisneyParks #CaliforniaAdventure #AvengersCampus #Avengers

Who do you think will win this Spider-Bot battle? ? #Disney #DisneyParks #CaliforniaAdventure #AvengersCampus #Avengers

As we are sure these insect friends will become very popular, we are excited to see more of these personalized superhero Spider-Bots being released. Personally, I would love to own a Thor Spider-Bot and electrify other bots with my thunder abilities inside the ring!

Will you be purchasing a Spider-Bot when Avengers Campus opens? Let us know in the comments below!

Need advice planning your Avengers Campus adventure inside Disney’s California Adventure? Our friends at Academy Travel are EarMarked Diamond and can help!

Comments Off on WATCH First Spider-Bot Battle at Web Suppliers in Avengers Campus!