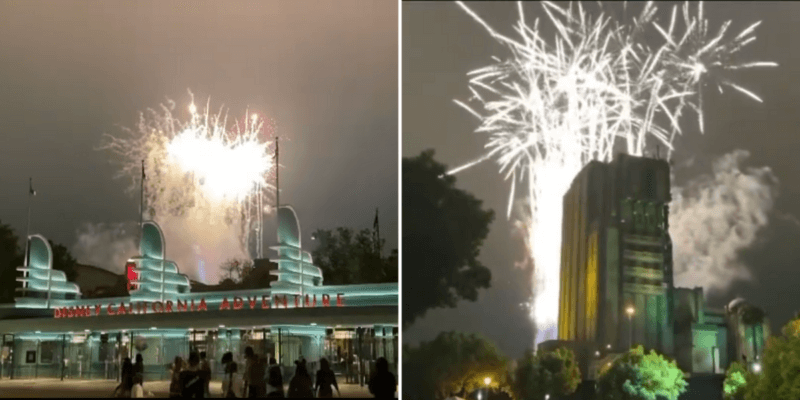 Late Tuesday night, June 1, just three days ahead of the official opening of the Disneyland Resort’s Avengers Campus, fireworks burst in the sky over Disney California Adventure Park — the first fireworks in over a year.

Since the temporary closure of the Disneyland Resort in March 2020, fans of the historic Disney Parks have eagerly waited for Anaheim skies to be filled with a bright burst of colors as their favorite Disney songs play in Disneyland Park. A little over one month since the Southern California theme parks reopened as fireworks filled the night sky once more.

Around 10 p.m. on Tuesday, June 1, Instagram account foodatdisneyland shared a video of fireworks bursting behind the California Adventure Park entrance:

What is truly interesting is that Disney did not wait for Guests visiting the resort to funnel out and clear the Esplanade area — or any area for that matter. Rather, the above video shows that Guests were still leaving Downtown Disney after spending the day at Walt Disney’s original Magic Kingdom. Whether they were giving these lucky Guests a sneak preview because they themselves are too excited to wait and open the land, Disney is ready for fireworks to return to the Resort officially.

It was reported earlier this week that Avengers Campus would boast the return of fireworks for the grand opening of Avengers Campus, a project Disney and Marvel fans have waited for since the A Bug’s Land closed in 2018.

Replacing the giant clovers and watermelons is Walt Disney Imagineering’s greatest feat yet, with Marvel officially making their way to a West Coast theme park.

Disneyland is pulling all the stops for the opening of Avengers Campus. From $100 giant sandwiches to a Spider-Man stunt-tronic, the Disneyland Resort crew is not wasting a second in welcoming its newest land “home.”

Technically, these will be the first fireworks at any Disney Park in the United States that Guests will be able to enjoy from inside a Disney Park. While the Magic Kingdom and EPCOT at the Walt Disney World Resort in Orlando, Florida, have tested a multitude of fireworks for their nighttime spectaculars (hopefully) returning soon, as well as Magic Kingdom setting off small pyrotechnics specifically for the holiday season, the fireworks that will take place for Avengers Campus on June 2 will mark a historic moment — the official dedication of the land.

Avengers Campus will officially open to the public on Friday, June 4 at Disney California Adventure Park at the Disneyland Resort. Once inside, Guests will be recruited by their favorite Marvel heroes and assemble to protect the world from its next threat.

Are you excited for fireworks to return to Disneyland? Let us know in the comments below!

Comments Off on Fireworks Spotted Ahead of Avengers Campus Opening