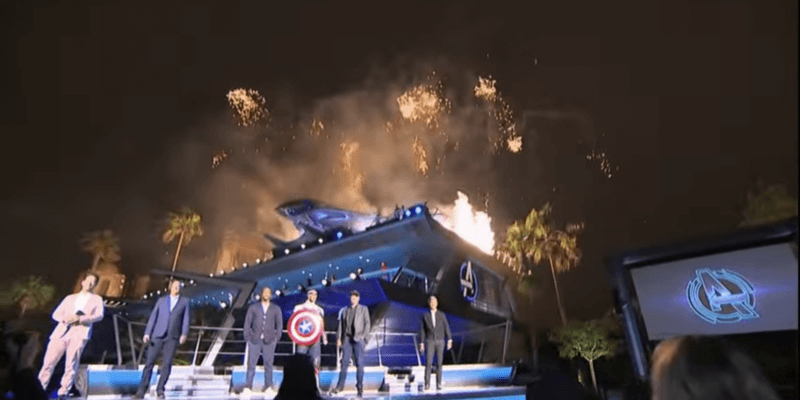 On June 2, Disneyland Resort celebrated the opening of its newest land, Avengers Campus. The new area will immerse Guests in all things Marvel — including meet and greets with the super heroes, helping Spider-Man save the campus from rogue Spider-Bots, and eating some of the delicious food being experimented on by Dr. Hank Pym, with the help of Ant-Man and The Wasp.

Chairman of Disney Parks, Experiences and Products, Josh D’Amaro, was there at the opening ceremony at Disney California Adventure to kick off the special event — and he could not have been more excited to be a part of bringing the Avengers Campus experience to the world.

“As you know, the Avengers’ mission is to protect the world and it is our hope that this land will inspire young and old to make the world a better place,” D’Amaro shared on Wednesday evening.

Marvel President Kevin Feige was on hand to help introduce the world to Avengers Campus. Feige has been the main force bringing the Marvel Cinematic Universe to life, as well as being incredibly involved in the design of the newest land.

“As a fan, I look around here tonight and I am pinching myself,” Feige said. “I really can’t wait for you to experience what we have in store for you…For our films, for our shows, we build these elaborate sets, but they’re temporary, and they only exist on screen. But here in a Disney theme park, our sets can be permanent. And now at Avengers Campus, all of our fans can walk around and experience these places, engage with the characters, be a part of these stories in real life.”

Feige, being a huge fan of Disney Parks since his childhood, recognized the importance of Walt Disney’s fundamental belief that Disneyland will never be complete as long as there is imagination left in the world — and brought that belief directly into Avengers Campus.

“Avengers Campus will never be completed. It’s a living, breathing space that will grow and evolve as our cinematic Universe grows and evolves. With new props and new characters assembling here at Avengers HQ.”

Paul Rudd — AKA Scott Lang/Ant-Man was also on hand to join in the celebration. Although the actor did seem a little upset that Pym Test Kitchen did not get the name he wanted — Lang Test Kitchen.

“I’m a little biased, but in my humble opinion, I think the best part is the Pym Test Kitchen,” Rudd said. “They probably don’t know this, but originally I had suggested it be called the Lang Test Kitchen, but I guess those emails never went through. They passed. No big deal, we’re a team. Their loss. Doesn’t matter, food’s great.”

While some Avengers could not be there to celebrate the opening of Avengers Campus, they sent along a special celebration message — including Zoe Saldana (Gamora), Scarlett Johansson (Black Widow), Mark Ruffalo (the Hulk), Danai Gurira (Okoye), Paul Bettany (Vision), and Brie Larson (Captain Marvel).

John Favreau, director of the original Iron Man  — he also plays Happy Hogan in the MCU — celebrated at Avengers Campus while he, along with Feige, introduced fans to the largest crew of super heroes ever assembled to commemorate the opening of Avengers Campus.

While the Avengers are Marvel, we are still at Disneyland. And no Disney celebration would be complete without fireworks — activated by Tony Stark’s Advanced Artificial Intelligence Assistant, FRIDAY.

Did you watch the Avengers Campus opening ceremony? What did you think? Let us know in the comments!

CLICK HERE to book your journey to Avengers Campus today with our friends at Academy Travel!