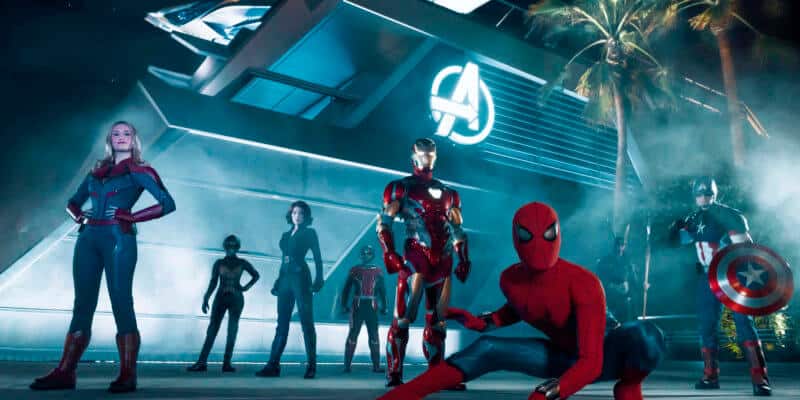 Avengers Campus is officially here! The Marvel-themed land makes its debut this week and fans are finally getting to see all the excitement firsthand.

Avengers Campus is described as “dedicated to discovering, recruiting and training the next generation of Super Heroes at the Disneyland Resort inside Disney California Adventure Park.” It’s no secret that character encounters are what most people are looking forward to at Avengers Campus, and the land does not disappoint when it comes to the heroes that you’ll potentially see. You’ll want to be on the lookout for the famous faces of these Avengers, who are confirmed to be roaming the park, just looking for the next Avenger to recruit:

For certain characters, there are specific interactive experiences where Guests can see super heroes can come to life. When Guests enter the land, they’ll be greeted by Iron Man, who will show off his newest armor, the Mark 80: a Disney Parks exclusive design. Guests can see Black Panther, Black Widow, and Captain America face off with a villainous foe — the Black Widow villain Taskmaster — at Avengers Campus. They might even see Spider-Man flipping 60 to 65 feet in the air above the rooftops of the Worldwide Engineering Brigade, AKA the WEB building before he stops to say hello to all the budding superheroes visiting the park!

Also, at Avengers Headquarters, Black Panther’s royal bodyguards the Dora Milaje — led by Okoye — will train recruits to learn how to be Wakanda’s greatest warriors.

Over at the overgrown ruins of an Ancient Sanctum, Guests can find Doctor Strange recruiting Guests and training them in the ways of mythic arts.

Looking for even more heroes? Fans can expect to see Ant-Man and The Wasp in their first Disneyland Resort appearances as they check out the latest experiments taking place at Pym’s Test Kitchen. Star-Lord and Gamora can be seen celebrating their recent escape from The Collector’s fortress by mingling with other heroes at Avengers headquarters. And when the Bifrost opens, Thor will join in the fun, along with his mischievous brother Loki. (And hopefully he can keep him from hatching his cunning schemes!)

Whatever hero you desire to see, Avengers Campus has you covered. Just remember that when you are visiting the Campus, there’s no telling when you will see these heroes. Guests should keep in mind that the Avengers will come and go as they please, all depending on what their own plans are. So, always keep your eyes peeled throughout the day so you can hopefully spot the heroes you hope to encounter on your visit!

What character are you most looking forward to seeing at Avengers Campus? Let us know in the comments!

Comments Off on All the Heroes You Can Encounter at Avengers Campus!