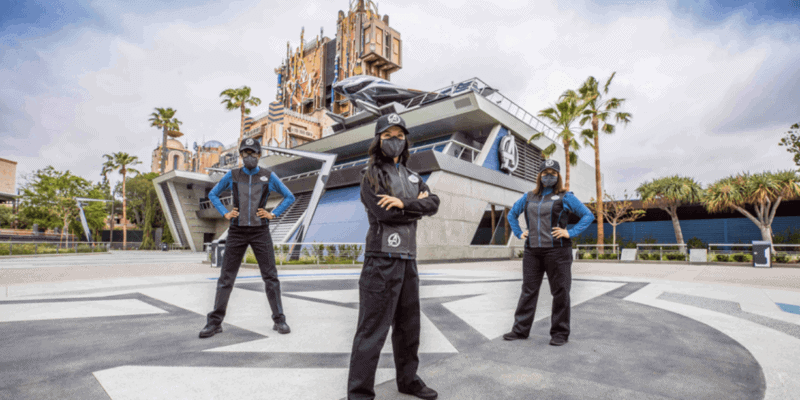 If you are excited to see the highly anticipated Avengers Campus at Disneyland Resort’s Disney California Adventure Park, opening on June 4, 2021, we have some more news that will have you waiting at the Marvel land entrance.

Disney Parks Blog has just released more information on Avengers Campus, and now, we can finally see what Cast Members will be wearing. If you have ever been to any Disney Park, you know Cast Member outfits are always incredibly detailed and fit each land and area perfectly. From Main Street, U.S.A., to Batuu at Star Wars: Galaxy’s Edge in Disneyland, the costuming truly helps Guests feel immersed in the world created by Imagineers and executed by Cast Members.

Joe Kucharski, senior costume designer, noted, “Our cast members play a unique part in the guest experience. These costumes are designed to help them embody their role in this epic story.”

Now let’s take a look at the variety of Cast Member costumes that we will see in the new Marvel-themed land!

Taking on unique roles, cast members in Avengers Campus are known as Campus Representatives, and the costumes they wear are inspired by each individual address within the campus. These looks were created to be cool and comfortable, while helping to ground guests in the immersive storytelling of the land.

Campus Representatives at WEB SLINGERS: A Spider-Man Adventure and WEB Suppliers will wear pieces that feature modern, techy emblems and materials made of lightweight, breathable fabrics with stretch for movement and flexibility.

Over at Pym Test Kitchen featuring IMPOSSIBLE, they will take on unique pieces like a Pym pocket protector, lab coat, hat and tie. Giving a nod to the growing and shrinking science used to create shareable bites and sweets at this location, these costumes feature a large “Pym Particle” on the hat and much smaller pattern on the tie.

The campus uniform includes cargo bottoms, a training shirt and a tactical-inspired vest that are comfortable, lightweight and breathable, so cast can be ready to take on any mission that comes their way.

At the Ancient Sanctum, costumes layer unique pieces that cast a dramatic silhouette with rich textures and sewing techniques inspired by the Mystic Arts.

Campus Representatives at both food carts in Avengers Campus will gear up in colorful aprons—one inspired by classic New York City food carts for Shawarma Palace and the other inspired by the second anchor attraction in the land, Guardians on the Galaxy—Mission: BREAKOUT!, for Terran Treats.

If you want to take a look at the new video showcasing all of the new outfits, step into the MCU with us in the below video!

Take a look at this TikTok from Disney Park to watch Cast Members suit up for Avengers Campus!

Watching Cast Members get ready enter the Marvel world only has us MCU fans craving to see more. Remember, at this time, Disneyland will only accept California residents, so until that rule changes, it looks like some of us will need to wait to step into the world of Marvel.

What do you think of the new Cast Member outfits for Avengers Campus?