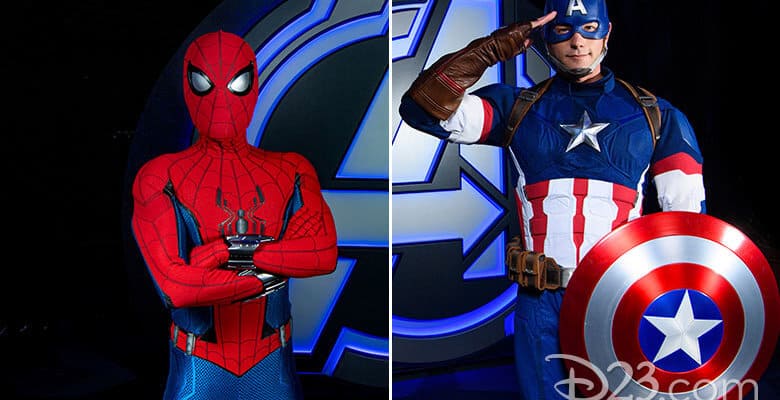 Avengers Campus is only a few short weeks away from opening on June 4. Disney is continuing to prep for the grand opening of the first land that will specifically honor the Marvel Cinematic Universe, and now Guests at Disney California Adventure can seemingly catch glimpses of characters within the new land.

Passionate Disney family and Instagram account, Next Stop Disney, shared a sneak peek at Captain America walking around inside the grounds. The video, posted on their Instagram Stories, was taken from Cars Land on the walkway in between Cozy Cone Motel and Luigi’s Rollicking Roadsters. We love seeing Park characters roaming around and this makes us excited that this land is finally coming to fruition!

As you can see, Captain America is atop the Avengers Headquarters building in the new Marvel land.

Right now, it looks like it’s Steve Rogers who Guests will continue to see at Avengers Campus, not Sam Wilson, who officially took up the shield and Cap mantle at the end of The Falcon and the Winter Soldier. You can still meet Steve Rogers as Captain American in Hollywood Land in a socially distanced character appearance, but by the time Avengers Campus opens, we expect all heroes to have moved over to the land to conduct their meet-and-greets there. (However socially distant they might continue to be.)

Marvel characters that fans can look forward to seeing at Avengers Campus include Iron Man (in his new armor, the Mark 80), Captain Marvel, Black Widow, Doctor Strange, Guardians of the Galaxy (including Star-Lord, Gamora, and Groot), Black Panther and the Dora Milaje, Thor, and Ant-Man and The Wasp. Some of these heroes have been seen already throughout Disney California Adventure over the years but, usually, they’re not mainstay encounters. At Avengers Campus, fans will be able to regularly see their favorite heroes, which will be a fun perk.

And don’t count out more heroes arriving in the future — according to the OC Register, characters from upcoming Disney+ series –including Hawkeye‘s Kate Bishop, Hawkeye himself, Falcon, The Winter Soldier, Scarlet Witch, and She-Hulk could all eventually make appearances. Marvel has no shortage of content coming over the next few years and with Avengers Campus, it seems the sky’s the limit.

Whether you’re interested in eating all the schwarma, picking up a cool collectible in the shape of the Infinity Gauntlet, having a heroic encounter with Spider-Man, or helping Doctor Strange at his Santorum, Avengers Campus has something for everyone. Captain America is waiting and ready to greet his fans. — and we can’t wait.

Are you excited for Avengers Campus to open?