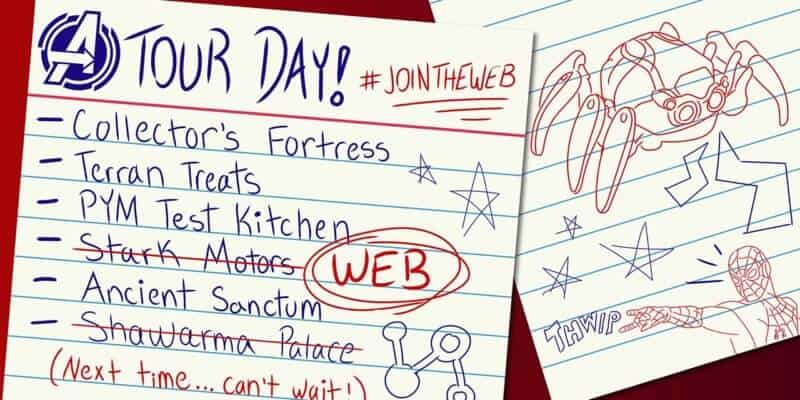 Disneyland has officially reopened after 412 days, and it seems as though things can’t get better. However, there is another major Disneyland Resort milestone to look forward to.

Disney announced the opening of Avengers Campus in early April. Guests were shown pictures and given more information on what they can expect when they enter Avengers Campus in June, including what the environment will look like and where they can get some delicious bites.

Well, now Disney is giving us an even more in-depth look at what Guests will see when they visit Avengers Campus. Disney Parks Blog shared some highlights from the new Disney California Adventure Campus, and now we need it to be June 4!

Calling all Super Hero recruits! We recently shared first-look images of Avengers Campus, opening at Disney California Adventure park on June 4. Today, I’m excited to take you back inside of Avengers Campus for a closer look at just some of the details you may come across as you visit the different addresses. But first, did you know that Campus stands for Centralized Assembly Mobilized to Prepare, Unite, and Safeguard? Now you know!

One of the first new photos Disney shared was the entrance to Avengers Campus — pictured below. The entrance will be located right by Guardians of the Galaxy: Mission Breakout!

Beautiful new blue coloring can be seen in the theme park ground, and it is described by Disney Parks Blog:

A late addition to the Campus, Taneleer Tivan, a.k.a. the Collector, placed his Fortress against its edges. This placement warped the ground immediately surrounding the alien stronghold causing a cosmic disruption to ooze from the ground below. Hues of blues, purples and yellows glow in the daylight. Pretty rad, huh?

Avengers Campus will also feature the new dining location, Pym Test Kitchen. Disney shared a look at the inside of the restaurant, and it is pretty mind-blowing. Take a look below!

Around the corner, Pym Test Kitchen featuring Impossible™ is a food innovation science lab where the food and drinks tell a story. As we’ve shared before, just as Ant-Man and The Wasp use “Pym Particles” to grow and shrink just about anything, Pym Technologies applies this innovative science to the creation of inventive-sized foods, like the pretzels that grow and shrink as they pass through the quantum tunnel. This logic also applies to the beverages and condiments, seen here overhead in the beverage and condiment station. No appetite is too big or too small here!

Disney Parks Blog also shared more amazing details and pictures of Avengers Campus, including where Guests can go to meet some of their favorite superheroes.

Back outside, we come to the heart of the land – Avengers Headquarters, where you will find the emblematic Avengers “A” on the building and surrounding areas. At Avengers HQ, you may catch a glimpse of the Avengers springing into action, ready to save the day. A shining Quinjet sits atop its roof as a beacon for the campus.

Continuing the new photographic tour of Avengers Campus, Guests are brought to the Ancient Sanctum.

Disney writes about this area:

Close by, but what feels like is located in another dimension are the overgrown ruins of an Ancient Sanctum. For as long as anyone can remember, rumors of unexplained events and energies have emanated from this remote location. Here, you’ll learn mysterious secrets from Doctor Strange and discover ancient, magical artifacts. Pictured here, the Orb of Cagliostro is known to be especially active at night when it flows with magical energy!

Disney ends their new tour with the area about the superhero who started the Marvel Cinematic Universe, Tony Stark, aka Iron Man. A newly released photo shows Guests the Stark Motor Industry building.

And for our final stop on today’s tour, we come to the front of the land. Back in the 1940s, Tony Stark’s father built a Stark Motors factory here in California, and decades later, Tony transformed the site into the Worldwide Engineering Brigade – also known as WEB. This is the place where bright innovators like Peter Parker have been assembled by Tony Stark to invent new technologies and equip everyday people to become heroes. While the Avengers themselves are sleek, organized, and structured, WEB is expressive, youthful and chaotic. You’ll notice this throughout WEB. For example, outside the former factory building, you can’t miss the colorful graffiti murals created by young recruits with a knack for the arts.

This photographic tour was just the thing we needed to get our Avengers Campus fix. Disney is giving us so much more information the closer we get to June 4, but it is all just a small glimpse into the Marvel world that Guests will be immersed in!

What are you looking forward to experiencing most when Avengers Campus opens on June 4? Let us know in the comments!

Comments Off on Disney Gives In-Depth Look at Avengers Campus Ahead of Opening!