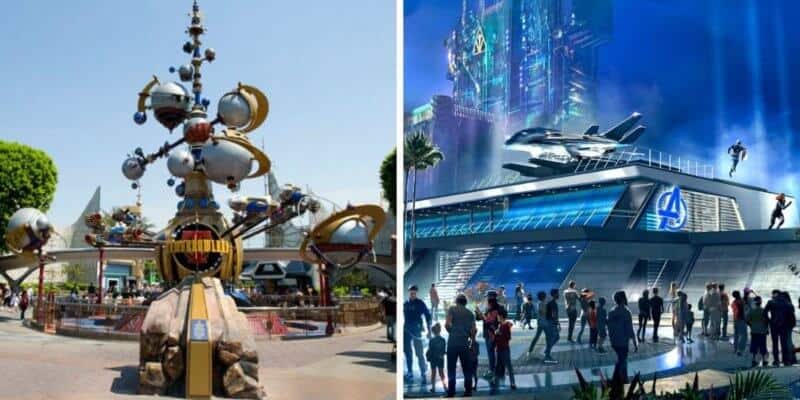 Disneyland Guests have been waiting patiently for the day they can experience the highly-anticipated Avengers Campus area of Disney California Adventure theme park at Disneyland Resort!

The grand opening of Avengers Campus, which was previously set for July 2020, was delayed due to the current pandemic, but that hasn’t stopped Disney from sharing their progress on construction, including the fact that they made Avengers Campus a priority project for the theme parks.

Not only did executives explain why this land is so exciting for Guests, but they also compared it to another popular section of a different Disney Park — Tomorrowland!

To start the Avengers Campus portion of the presentation, Scot Drake, Creative Executive, Marvel Global Portfolio explained why the new immersive land is so exciting for Guests stating:

“It’s a pretty big story because it is a major expansion bringing super heroes to life and putting Guests right in the middle of all this action, so it’s something that I know we’re very excited about and been working on for a very long time.”

Adding onto the conversation, Steve Spiegel, Executive Story Editor, explained why the Avengers are actually like The Muppets, which may surprise a lot of you:

“Thinking about this panel and thinking about Avengers Campus is very interesting. The nice thing about the Avengers is, I know you’re not expecting to hear this, they’re like the Muppets because they live in our world. So in some ways, we can put them on Earth and it makes sense for an Avengers land because they fly and they live in our world. Not only that, Tony Stark has a house in Malibu, the Pyms live in San Francisco, Stark Industries is in the South Bay. So there is a lot of roots in California for the Avengers throughout their history already.”

As the panel continued, the creatives from Walt Disney Imagineering dove into how they brought the ideas to the table and how they are able to put Guests right in the middle of these super hero stories.

Drake explained to the viewers:

“And because these stories take place in our world, defining the place was one of our biggest challenges. All of our stories in our park start from a place, and usually it’s taking you to a time and place. But for these stories, Iron Man walks into this room right now — I’m in a story with all of them. Super heroes give us as Imagineers this opportunity to kind of redefine and elevate our craft, right, put Guests right in the middle of these epic stories. And what’s cool about all of these stories is they’re interconnected and they’re linked through these extraordinary events. And that’s similar to our attractions right, these are the events that link this whole place together.”

Jeanette Lomboy, Site Portfolio Executive for the Disneyland Resort, then started discussing how Disney California Adventure is different from Disneyland Park — and why that’s a good thing, especially for an immersive land like Avengers Campus:

“It’s a really good point because you know Disney California Adventure is a counter to Disneyland. Disneyland’s about the imaginary, the far away fantasy. That’s not what California Adventure’s about. It’s about innovation, it’s about adventure, it’s about discovery — which is why telling the story of the Avengers, telling the story of Spider-Man, and making sure that our Guests are a part of that story is so important and perfect for the story we are trying to tell here.”

“Avengers Campus was really our opportunity to sort of create a Tomorrowland for Disney California Adventure and really look forward to sort of tap into that spirit of Silicon Valley through inventors like Stark and Pym to really dream about what the future could be.”

John Mauro, Portfolio Producer, then went on to explain how Guardians of the Galaxy – Mission: Breakout! created an entire new area and invited in a brand new audience, noting that Guests wouldn’t have thought to visit Disney California Adventure before then. Mauro also compared Avengers Campus to Tomorrowland, saying he hopes it will never be complete and always evolving:

“Hopefully, like Tomorrowland, [Avengers Campus] will never be complete. It’s always going to be changing and evolving with new characters and new heroes and new stories to tell, thanks to all the great content coming out at the studios.”

Though we still do not have an exact opening date, Walt Disney Company CEO Bob Chapek did confirm during the Meeting of Shareholders on March 9 that Avengers Campus will open “later this year,” indicating it is not planned to open along with the theme parks, which Chapek hopes to have ready by end of April.

Once Avengers Campus does open to the public later this year, it will start with the first phase, where Guests will experience a Spider-Man attraction called WEB SLINGERS: A Spider-Man Adventure, a Doctor Strange section of the land called Sanctum, an Ant-Man and the Wasp restaurant called Pym Test Kitchen, and a Marvel character stunt show. Additionally, the existing Guardians of the Galaxy: Mission Breakout attraction, which took over the Tower of Terror, will also be part of this new land.

As for the second phase of the Marvel-themed land, it will open at a later date — currently an unannounced date — along with an Avengers E-ticket attraction.

For a complete guide on what Guests can expect once Avengers Campus does open, visit our website here.

Are you going to visit Avengers Campus when it opens to Guests later this year? Let us know in the comments below.

Comments Off on Disney Built a Fresh Tomorrowland With Avengers Campus