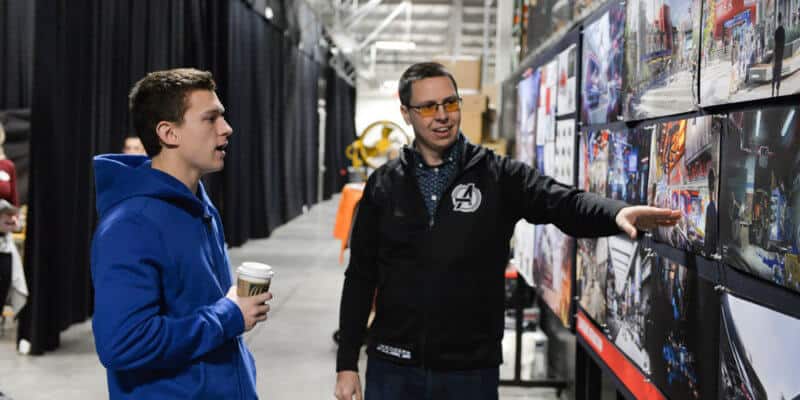 Disney previously shared that Peter Parker/Spider-Man himself, Tom Holland, will play a major role in the new Avengers Campus attraction WEB SLINGERS: A Spider-Man Adventure. Now, we are getting a first look at Holland as Peter Parker in the all-new ride, which is expected to open at Avengers Campus at the Disney California Adventure theme park sometime this year.

When describing the attraction, Holland said, “For me, personally, it’s the most I’ve ever felt like Spider-Man,” Disney shared with Inside the Magic.

Disney shared the following video today — and we can even see that Holland himself is wearing a WEB hoodie to go with the Avengers Campus and attraction theme. Take a look:

Below is an excerpt from the Disney Parks Blog article describing WEB SLINGERS: A Spider-Man Adventure:

In the WEB workshop, young engineers specialize in developing innovative technologies to equip and empower a new generation of Super Heroes. This workshop showcases the inventions of Peter Parker and the rest of the WEB Tech team, including their adorable Spider-Bots, which are designed to be robotic sidekicks capable of building anything a Super Hero might need. When Peter’s demonstration goes awry, the Spider-Bots are stuck in a replication loop, creating even more Spider-Bots!

Donning 3D glasses, your mission will be to test-drive the aspiring inventor’s latest invention, the WEB Slinger vehicle, and discover your web-slinging super powers! Through specially designed, innovative technology that recognizes body movements and gestures, you will reach out your hands and sling webs from your wrists, just like Spider-Man. As the WEB Slinger vehicles progress, you will virtually pass through several other Campus addresses, including Pym Test Kitchen, Avengers Headquarters and the Collector’s Fortress, also home to Guardians of the Galaxy – Mission: BREAKOUT! As the mission continues, Spider-Bots will become harder and harder to beat as they continue to multiply.

Although Disney has confirmed that Avengers Campus is expected to open at Disney California Adventure sometime in 2021, as a reminder, Disneyland and Disney California Adventure theme parks are still temporarily closed as a result of the ongoing pandemic and current restrictions in the State of California. There is currently no word on when exactly the Southern California Disney Parks will open, but Disney fans and The Walt Disney Company have indicated that they are hoping for a 2021 opening of the parks (and that includes a 2021 opening of Avengers Campus, the Marvel-themed land coming to DCA).

Downtown Disney and, by extension, Buena Vista Street in DCA are currently open with limited operations. Disney Park fans who wish to visit the Downtown Disney District can currently do so, even amid California’s stay-at-home order. Additionally, although Disneyland Resort recently ended its Annual Passport program, discounts are valid for a limited time. Click here for details.

We can’t wait for the latest and greatest Spider-Man attraction — WEB SLINGERS: A Spider-Man Adventure — to open at Avengers Campus sometime in the future. Until then, stay tuned to Inside the Magic for the latest Disneyland Resort news.

Related: OpEd: Disney Can Do Marvel Better Than Universal Ever Did

Are you excited for Avengers Campus to come to Disneyland Resort? Let us know in the comments!