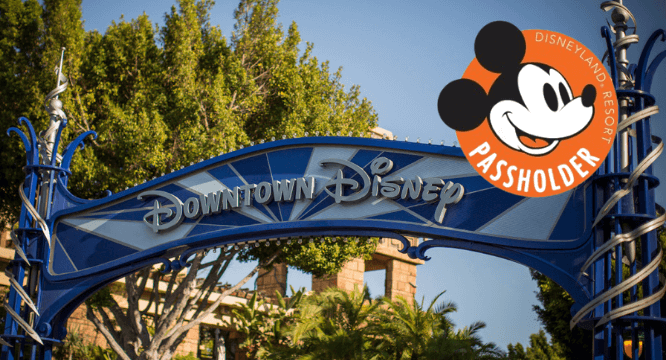 Ready to shop until you drop? If you held a valid Disneyland Resort AP up until March of 2020, then ready your wallet for a trip to Buena Vista Street and Downtown Disney! A new Disneyland AP discount is ready and waiting for you for a limited time. Shoppers can scoop up this discount starting Monday, January 18, through February 25, 2021.

Although the Disneyland Resort Annual Passport program has been suspended, there is some good news for Disneyland APs heading to the Downtown Disney District. Read on for more details.

Disneyland shared the news today about a special Disneyland AP discount of 30% for all DLR Annual Passholders who had Passports as of March 14, 2020 (when Disneyland Park and Disney California Adventure Park closed). The verbiage on the official Disneyland website reads:

We are excited to share a special merchandise discount for our Disneyland Resort Annual Passholders! Passholders who held active Passports as of March 14, 2020, the park closure date, can receive 30% off select merchandise purchases at Disney owned-and-operated locations at Downtown Disney District and Buena Vista Street. This offer is valid Monday through Thursday, beginning January 18 through February 25, 2021.

It should be noted that this discount can only be used on weekdays at Disney-owned locations and is not valid on previous purchases. Find the fine prints on the new Disneyland AP discount here.

Disney also announced the following information about ongoing AP discounts that will be applicable even though the program has been canceled for the time being:

Annual Passholders who held active Passports as of March 14, 2020 will continue to receive applicable discounts, based on their Passport type, on merchandise and food & beverages at select Downtown Disney District and Buena Vista Street locations, until new membership offerings are announced.

This is bittersweet yet exciting news as the Annual Passholder program for the West Coast has been put on pause and any currently eligible Passports will be “sunset” and refunded remaining balances. With Disneyland Park and Disney California Adventure operating with a heavy margin of Annual Passholders, it’s shocking that the program is now being ended.  Disney stated, however, that a new offering will be announced in the future.

Disney’s statement announced that the AP program would be put on a permanent pause until a new offering could be presented. It makes sense that the company would offer a “last hurrah” discount for a shopping spree at the now-open shops at Disneyland Resort.

Will you be shopping with your possible sunset discount at Downtown Disney? Leave us a comment about what you plan to pick up with the awesome 30% discount!