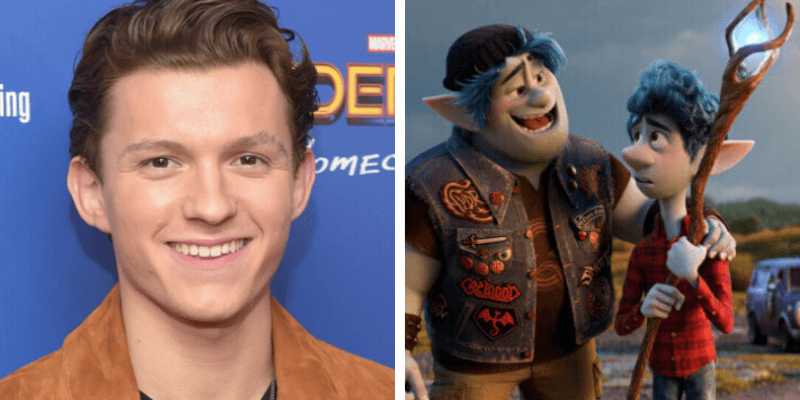 “I think for every young actor, you set yourself goals and I have mine that I’ve set out since I was a kid and they’re still the same today and one of them was being in a Pixar movie.” –Tom Holland

Disney-Pixar’s epic fantasy adventure, Onward, is about to finally be released in theaters, and while fans might be excited for this film because it stars Marvel actors Chris Pratt, and Tom Holland, it’s also a very special movie, personally, for both actors, especially Tom Holland.

Upon seeing it at the premiere, the British actor achieved one of his lifelong dreams: he got to star in a Pixar film.

“I think for every young actor, you set yourself goals and I have mine that I’ve set out since I was a kid and they’re still the same today and one of them was being in a Pixar movie. So then you guys were kind enough to fly all the way to London to meet me and to tell me your story and to then pitch the movie, I first was just so honored. It was the first time that anyone had come to me and I was like ‘this is amazing’ ad it’s Pixar!”

Holland then explained that it was a very easy decision for him to accept his role as Ian Lightfoot. “You don’t say ‘no’ to Pixar because they’re the best,” he said.

Holland also took a moment to once again praise Pixar Animation Studios for the family environment they uphold. “The nice thing about it is that they have this sort of family feel that Marvel also has,” he said. “I feel like we were welcomed into this wonderful family with such open arms, and it was such an amazing process.” Onward is the first time Chris Pratt and Tom Holland starred in a movie together outside those for the Marvel Cinematic Universe.

But while Chris Pratt and others had already seen the film in its entirety before the press event, the notorious spoiler, Tom Holland, still had not had the pleasure. Whether it was a genuine liability concern or just a continuation of the joke for branding purposes, Holland was forced to wait for the film’s premiere. But he did not let that fact spoil his excitement for the film. “I still can’t quite believe the film is about to come out. It feels like yesterday we started working on it,” he said. “I’m just super pumped to see it and experience this amazing thing we’ve all created.”

Disney-Pixar’s Onward starring Tom Holland and Chris Pratt with Octavia Spencer and Julia Louis-Dreyfus arrives in theaters across America on March 6. The story follows two teenage brothers who go on a quest to bring their deceased father back for one full day.

It’s good in life to set goals and have milestones. A big one for me was being in a Pixar movie and I can’t quite believe that this came true. Thank you @disney for yet again making me the luckiest kid going. Onward is a film about family and brotherhood and that’s exactly how you should watch it. Grab the fam and take them to see onward… you’ll love it. And finally, Mr @prattprattpratt is soooo funny in this film – I’m so glad we got to work together again buddy ??

Are you excited for Disney-Pixar’s Onward? Let us know in the comments!

Comments Off on “Onward”: Tom Holland Fulfills Lifelong Goal of Starring in a Pixar Movie