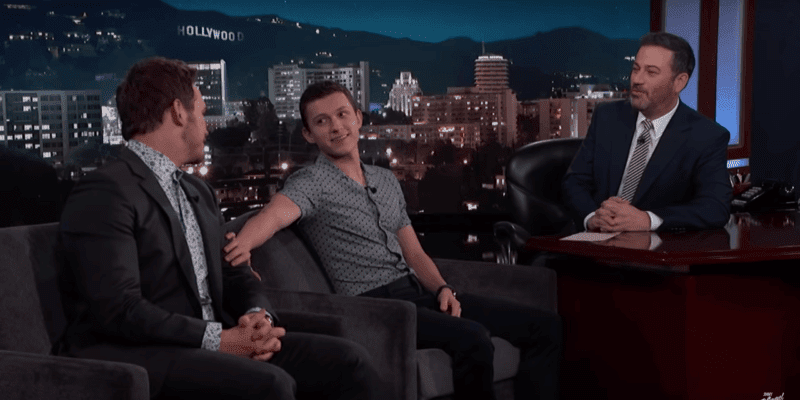 “I have a question for Mr. Chris Pratt,” Holland began. “Of all the actors in the world, who is your favorite?”

A little taken aback, Holland followed up saying “Okay. Yeah, that’s cool, I like Denzel too. What about an actor whose name is Tom?”

“He’s good. Okay I can sympathize for you again,” said Holland. “What if his second name began with an ‘H’?”

Pratt refuses to give in. “Oh. Hanks! Beautiful Day in the Neighborhood. That was good.”

“Oh! I see where this is going,” Pratt said smiling. “Tom Hardy. He played Venom and was great. Does that answer your question?”

“Hiddleston,” Pratt exclaimed. Tom Holland just stared at him with a cold stare that loosely translates to “Really bro?”

“Do you want me to tell you the movies he’s in?”

“Yeah, why don’t you just come up here so we can figure this out,” Kimmel says.

After a commercial break, Tom Holland and Chris Pratt got down to business talking about Disney-Pixar’s Onward. Of course, Holland has not seen the full film yet, carrying the joke that nobody can tell him anything. “I’ll see it at the premiere crying with everyone else,” he said.

Related: Pixar’s “Onward” Will Leave Grown Men In Tears, According To Chris Pratt

Pratt shared some insights into the film’s story. The Director never met his father, who died before he was born, and made this film for his older brother.

While both Pratt and Holland have brothers, they now look to each other as brothers themselves. After seeing their banter at the start of this interview, nobody can doubt that.

Related: Why I’m Excited for Pixar’s “Onward” & You Should be Too!

Are you excited for Onward? Let us know in the comments!