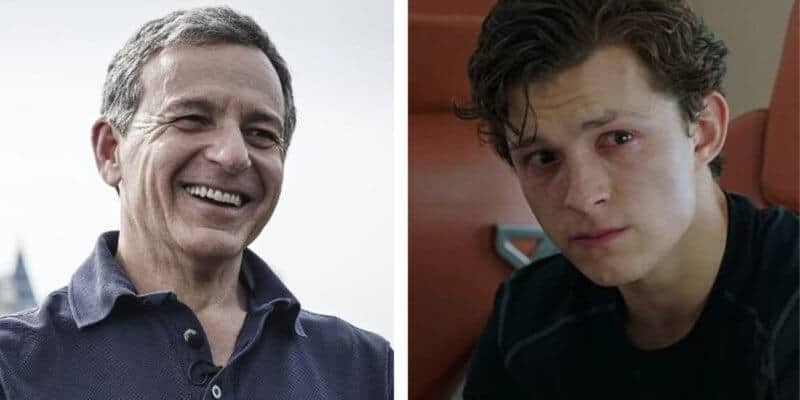 Tom Holland recently appeared on Jimmy Kimmel Live! where he admitted he may have needed a bit of liquid courage before calling up the CEO of The Walt Disney Company, Bob Iger.

“I wanted to say this has been an amazing five years of my life,” Holland said on the call with Iger. “Thank you for changing my life in the best way and I hope that we can work together in the future, and I got his email and I sent him the email and then he responded very quickly saying, ‘I’d love to jump on the phone with you at some point, when are you free?’”

Holland was referring to the fact that his beloved superhero character, Spider-Man, was leaving the MCU to join Sony. Every MCU fan even started to give up hope as they all began to accept the fact that Spider-Man was no longer part of the MCU, and that is when Holland decided to give Iger a call.

During Jimmy Kimmel Live! Holland shared that his appearance at this year’s D23 Expo left him a bit depressed and that is when he decided to write Iger an email expressing his gratitude, which is when Iger suggested the two of them should jump on a call.

About two or three days later, Holland said he received a phone call from an unknown number, which he immediately thought was Iger, but the problem was, he was “like three pints in” at a pub.

“I have a feeling like ‘this is Bob Iger, but I’m drunk,’” Holland said. “So my dad’s like, ‘Just take the call, you’ll be fine.’ So anyway, I answer the call, and I’m like, ‘Hey, Bob.’ I basically said, ‘Thank you for the opportunity,’ and then he said, ‘There is a world where we can make this work,’ and then there was a bunch of phone calls back and forth from [Sony film chairman] Tom Rothman. He was really instrumental in the process and it was really interesting for me to have these two studio heads [be] like, ‘What do you think?’ I’m like, ‘I don’t know, I’m an actor.’”

And now, Bob Iger is speaking out after learning the news about Tom Holland. “He did seem a bit giddy,” Iger tweeted in response to the news.

Bob Iger also appeared on Jimmy Kimmel Live! earlier this year where he shared that Holland was very emotional on the call and stated “it was clear that he cared so much. And actually, we care about him.”

Regardless of how the call went down, we are so glad to see Holland and Spider-Man staying in the MCU (and we are happy Iger was such a great sport about it all, too!)

Are you happy to see Spider-Man stay in the MCU? Let us know in the comments.