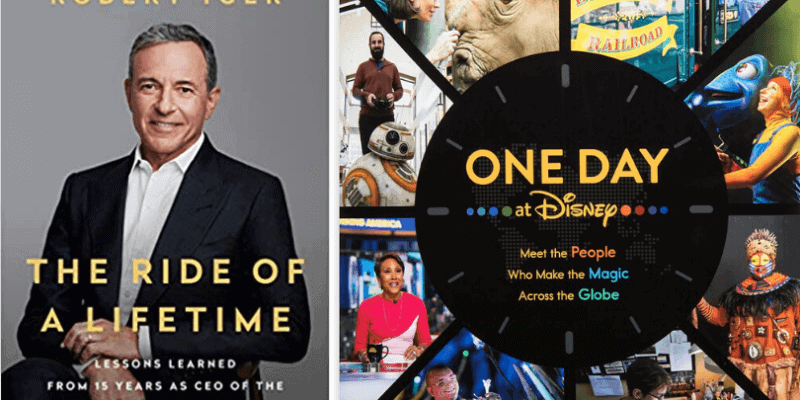 The holiday season is upon us, and while any time of year is the perfect time to give the gift of reading, the holidays are our favorite. Chairman and CEO of The Walt Disney Company Bob Iger recently released his personal account of experiences with Disney and the lessons he’s learned along the way. We enjoyed Iger’s book so much that not only did we want to recommend it to you, but also we wanted to share a couple of others for those who want to add more Disney books to their personal library.

Here are our top three recommendations for books to give to the Disney fan in your life (or to purchase for yourself!) this holiday season.

The Ride of a Lifetime by Robert Iger

Bob Iger‘s new book — The Ride of a Lifetime: Lessons Learned from 15 Years as CEO of The Walt Disney Company — has got to be our favorite book we’ve read all year. Whether you’re a huge fan of the Iger era of Disney or you’re counting the days until Iger steps down, there’s no question that this book gives readers an inside look into what running Disney is truly about (and of course the scoop on how those acquisitions of Pixar, Lucasfilm, Marvel, and Fox went down!).

But Iger’s new book (which it distinctly says is not a memoir) isn’t just about what it’s like to be the Chairman and Chief Executive Officer of The Walt Disney Company. It’s a raw, real, and insightful examination of what it’s like to not only successfully run a company, but also to successfully be a member of a cohesive team, a part of something bigger than yourself. As it is described, “This book is about the relentless curiosity that has driven Iger for forty-five years…It’s also about the thoughtfulness and respect, and a decency-over-dollars approach that has become the bedrock of every project and partnership that Iger pursues,” and we couldn’t agree more.

While The Ride of a Lifetime is at the top of our recommended reading list for any Disney fan (or anyone looking for career advice in general), there are a couple more new books this season that we think you’ll enjoy, too.

Travels with Figment by Marty Sklar

Long-time Disney fans are probably familiar with Marty Sklar’s books. Skar, a Disney Legend and Imagineering Ambassador, dedicated his life to Disney, and this book shares his personal accounts and stories that he had never told before. Sklar has created Disney magic like no other Imagineer, and for anyone interested in learning more about his life, his connection with Walt Disney, his passion, and his adventures, this book is one to pick up.

One Day at Disney

During D23 Expo this summer, we learned about a project that The Walt Disney Company had been working on: a project called One Day at Disney that showcases the people who make Disney magic all around the world. The book, set to release on December 3 of this year, shares stories from people who work for every part of Disney, from Disneyland and Walt Disney World Cast Members to ABC news anchors to animators and directors. There are 80 stories of Disney employees told in this book, and each one is equally heartwarming and insightful. It’s meant to inspire whether you’re a Disney fan or not.

Any Disney fan who wants an even deeper look into life at the Disney company would love to read this book.

Which of these books is at the top of your wish list this holiday season? Share this post with any Disney fan in your life who’s looking for a great new read!