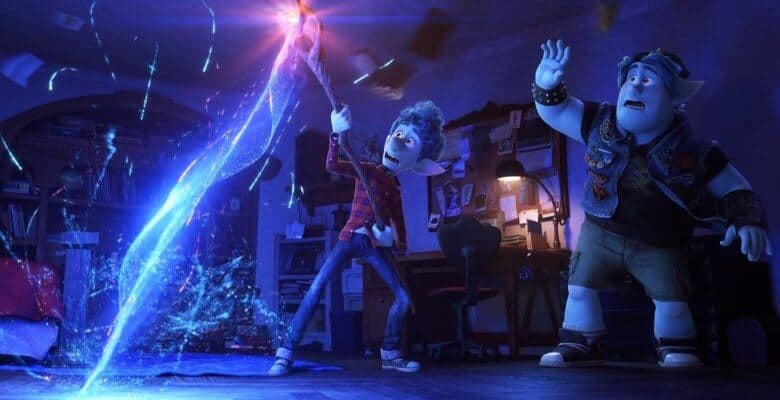 If you aren’t yet excited about Disney and Pixar’s newest original animated flick Onward, then buckle up — it’s going to be a fantastical ride. The team at Pixar has delivered a story of epic proportions that people of all ages and walks of life can relate to (and no, you don’t have to know anything about mythical creatures to fall in love with this film). At the Onward press conference, Inside the Magic learned why Onward is Pixar’s first fantasy movie — and truly, why it had to be.

For context, let us give you a bit more background information on Onward. The movie follows two teenage elf brothers, Ian and Barley Lightfoot, who go on an journey to discover if there is still a little magic left out there in order to spend one last day with their father, who died when they were too young to remember him. The film’s cast includes iconic actors like Tom Holland (of Spider-Man), Chris Pratt (of the Marvel Cinematic Universe), Octavia Spencer, and Julia Louis-Dreyfus, all of whom go on an epic quest and encounter magic spells in one way or another. You’ll laugh, you’ll cry, you’ll laugh some more — and in true Disney and Pixar fashion, you will come away from the film learning something, most likely something about yourself.

At the root of this story is an incredible message about the loss of a loved one, and how everything we truly need has been inside us all along. But the film is also a fantasy story, something that Pixar Animation hasn’t yet explored. Until now.

But why did Pixar decide to enter the fantasy realm with Onward, and could the story have been told in any other way? The film’s director Dan Scanlon shared why Onward had to be Pixar’s first fantasy movie.

“We needed a way in which this father could come back to life. You know, that was really the reason behind the magic,” Scanlon shared during the press conference for the movie. “We could have done a version — and even considered one — where the boys were scientists who built a machine that brought Dad back. Magic just felt more romanticized. And again, we didn’t want to set it in an old-timey fantasy world, because it’s a very modern story. And if these boys had all been in robes and their father was in robes, it just would’ve been ridiculous. So we thought, let’s do a modern one…There’s a sort of natural humor that comes out of that.”

Scanlon went on to describe how the world of Onward and the personality of the younger brother Ian mirror each other in many ways. “The world in this movie is people who have (just become) kind of complacent and even fearful of taking risks. They’ve lost their potential. And Ian is a kid who’s never lived up to his because he’s insecure and fearful. So it’s always nice when the world and the characters can kind of mirror. That, and we just wanted to show dirty unicorns.”

While the trash unicorns were pretty hilarious to see on screen, we agree that choice to make Onward a fantasy movie does indeed come across as very intentional. We don’t want to spoil too much of the film, but it’s very clear while watching that the fantastical elements (mixed with the modern suburban setting) make sense within the context of the movie and the world it puts the audience in. Like other Pixar films, Onward does a great job at convincing its audience that everything we see is believable while we’re watching it.

Disney and Pixar have blended the worlds of fantasy and suburbia in Onward, and for this being Pixar’s first true fantasy film, it definitely works.