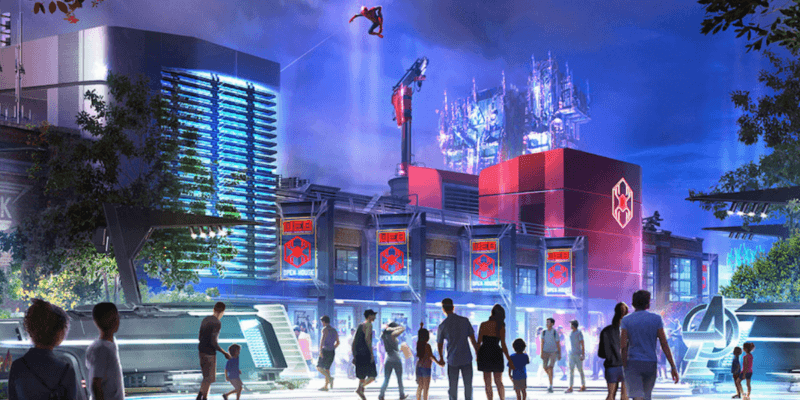 Fans eagerly waiting for Disneyland Resort to reopen are on the edge of their seats waiting to sprint to the new Avengers Campus coming to Disney California Adventure Park in Anaheim, California.

If all goes well, 2021 will be the year of theme parks across Los Angeles and the world reopening, and fans can experience brand new attractions — such as EPCOT’s highly anticipated attraction Remy’s Ratatouille Adventure at the Walt Disney World Resort. While there are multiple promising experiences set for Avengers Campus at the Disneyland Resort, this fan is ready to fling some webs with my friendly neighborhood Spider-Man.

Disney California Adventure’s WEB-SLINGERS: A Spider-Man Adventure has received a 2021 opening date with the new Marvel land, but the theme park has to reopen first. This reporter hopes Disneyland’s conversion of the Toy Story parking lot into a COVID-19 vaccination distribution site at the Disneyland Resort will help sway government officials to reopen theme parks.

WEB-SLINGERS: A Spider-Man Adventure is the flagship attraction for Avengers Campus once the land opens, and fans were given a sneak peek of the attraction during 2020’s IAAPA Expo:

While there has been little information released about the exciting WEB-SLINGERS: A Spider-Man Adventure, the OC Register notes:

In Orlando, fans are literally just along for the ride on Universal’s Spider-Man attraction. But Disney’s “Web Slingers” will give its fans much more to do. It’s an interactive ride, but without the guns on Buzz Lightyear or the pull strings on Toy Story Midway Mania. Riders will shoot virtual webs using their hand motions to trap rogue Spider-Bots.

The same technology found at Legoland’s Ninjago The Ride to shoot fireballs and lightning from guests’ hands will be utilized in the upcoming Spider-Man attraction.

Usually, theme park fans have to travel across the globe to see how different companies produce attractions, experiences, and lands around the same intellectual property. However, this all changed with Star Wars: Galaxy’s Edge receiving two dedicated lands in the continental United States. Disney is continuing the trend with the Disneyland Resort‘s WEB-SLINGERS: A Spider-Man Adventure. Although the ride will only be available at Avengers Campus in DCA, it will still be the second ride that incorporates the Spider-Man character in the U.S., since one already exists in Florida at the Universal parks.

In my opinion, there is currently no full-fledged Marvel land. While Universal Orlando’s Islands of Adventure Park is home to Marvel Super Hero Land, it’s not fully immersive. With three thrilling attractions featured, there’s a lack of immersive theming and experiences that transport guests into the Marvel Cinematic Universe and comic books.

According to The OC Register:

Universal got its Marvel rights before Disney bought the comic book company, and its Spider-Man ride is one of the world’s best, ranking in the top five globally in our annual reader poll on ThemeParkInsider.com. Using a motion-base ride system similar to Disneyland’s Indiana Jones ride and Universal Studios Hollywood’s Transformers, Orlando’s Spider-Man ride takes visitors on a wild journey through New York City in a Daily Bugle news van.

Related: Will Avengers Campus Be the Next Expansion of Downtown Disney?

Disney can learn from Universal Orlando’s rights and wrongs of their Marvel-themed land and hit it out of the park (with Thor’s Mjölnir!).

Love it or hate it, Star Wars: Galaxy’s Edge is one of the most immersive experiences available to theme park fans, with a life-sized Millennium Falcon Light Freighter, themed eating/shopping establishments, and an overwhelming amount of detail. Every rock and blaster hole tells the overall story of the land.

Universal Orlando’s Marvel land is entertaining, but it doesn’t necessarily feel like you’re starring alongside your favorite Marvel superheroes in the next Avengers film. While both the Disneyland Resort and Universal Orlando Resort offer award-winning theme park experiences, Disney tends to take the cake on theming by many fans of both resorts.

Related: Disney World Won‘t Ever Get a Marvel Land — Here’s Why

With a prolonged delay in opening Avengers Campus, Disney Imagineers have hopefully been able to dive into more in-depth detail that wasn’t possible with the previously projected openings.

To compete with — or even outdo Universal’s The Amazing Adventures of Spider-Man — Disney will need to produced a new attraction at the level of Star Wars: Rise of the Resistance (fun fact: the Creative Portfolio Executive, Scott Trowbridge, behind Universal’s Spider-Man attraction led Disney’s Rise of the Resistance development). Disney is giving a revolutionary Spider-Man experience that’s sure to win the hearts of fans.

We can’t wait to experience Avengers Campus this year and see which Spider-Man attraction is the best!

Which Marvel land will be better? Let us know in the comments below!

Editor’s Note: The opinions expressed in this article do not necessarily reflect Inside the Magic’s views overall.

Comments Off on OpEd: Disney Can Do Marvel Better Than Universal Ever Did