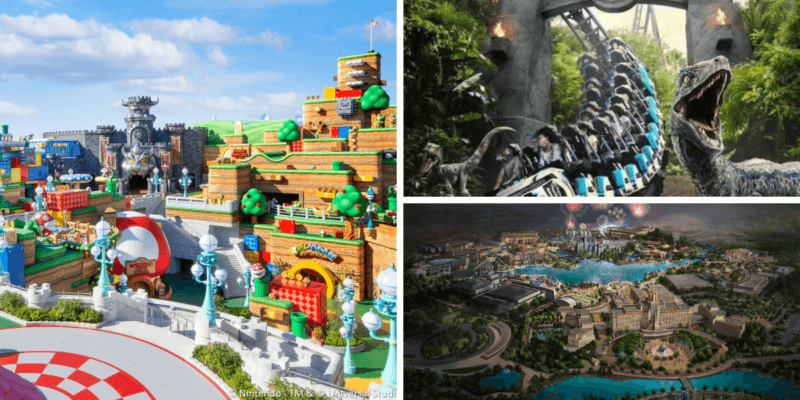 Universal has been on a roll lately! If you are a fan of Universal theme parks then you should be very excited about what they have planned for 2021. Today we want to capture everything new and groundbreaking that is opening at a Universal theme park resort this year, including their brand new theme park! It is a long list, so let’s jump into it.

Universal Orlando currently has two theme parks open, however, Volcano Bay the water theme park did close this winter unexpectedly. As a Universal Annual Passholder myself, winter in Central Florida is my favorite time to visit Volcano Bay as the park is typically less crowded! Thankfully Universal has set a reopening date of March 1, 2021, and they recently announced that the park could even open before then. We cannot wait to be back at Volcano Bay in 2021.

How can we not address the GIANT dinosaur in the room? One of the most anticipated new attractions Universal has ever built, the VelociCoaster will roar to life in 2021!

This imposing structure towers over the lagoon inside Universal’s Islands of Adventure. While we do not have an opening date yet (aside from summer 2021), Universal continues to test the rollercoaster. We recently reported on the nighttime ride testing which revealed that the coaster train cars were completely illuminated!

This new expansion is an incredible testament to the ingenuity Universal can bring to its theme parks. This highly themed new land contains two brand new attractions, a quick-service style food location, snack stands with plenty of themed treats , and course gift shops.

Koopa’s Adventure, a Mario Kart attraction. is the anchor of the land and as we have seen photos of the ride vehicles and AR goggles it appears that we are in for a wild ride down Rainbow Road.

Can’t wait to visit Super Nintendo World? Check out this virtual tour you can take of the land right now!

This might be more exciting than Super Nintendo World– Universal is opening a brand new theme park in Beijing in 2021.

Universal Beijing Resort will be opening in May 2021.  Bringing new lands and experiences never before seen at any other Universal theme park resort. Expect to see Isla Nublar as a guest to Jurassic World, fight alongside Po from Kung Fu Panda, a new attraction from Steven Speilberg, and a flying Toothless from How to Train Your Dragon!

We cannot wait to see this new theme park hit the global stage this year.

As the pandemic continues, Universal Studios Hollywood has remained closed. However, we are hopeful that the vaccine could help reopen the theme park for Guests once again in 2021. Universal is currently building their Super Nintendo World and construction is moving along quickly. While we definitely do not anticipate this expansion to open in 2021, we do see Super Nintendo World as a great draw for fans to return to USH after it was closed for a year.

Reopening Universal Studios Hollywood in 2021 would be some seriously big news, and we are keeping our fingers crossed!

No new updates for Universal’s other theme park, Universal Studios Singapore, but if they announce anything for 2021 we will let you know.

With so much happening at Universal theme park resorts around the world, we can hardly contain our excitement!

What new Universal attraction or offering are you most excited for? Let us know in the comments!

We can help you book the perfect Universal vacation to any of their theme park resorts! Click here for more information.