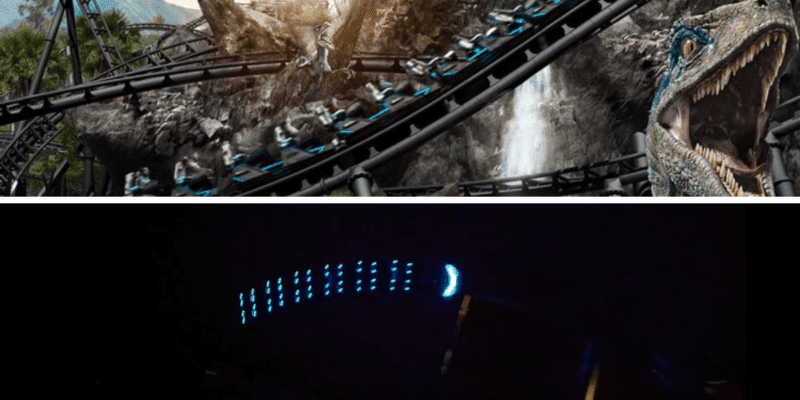 Recently Universal Orlando has been testing the VelociCoaster as it continues to inch closer and closer to its grand opening. Now it is being tested with the lights on at night, and it looks INCREDIBLE!

While we continue to wait for an official opening date for this highly-anticipated attraction, new updates like these get us very excited for what’s to come!

Thanks to theme park reporter Midway Mayhem–who has been extensively documenting through video the construction of the VelociCoaster–, we can see the trains fully illuminated as they traverse the coaster track.

Here's our first look at the Jurassic World VelociCoaster with the train light on and it looks fantastic!#velocicoaster #universalstudios #islandsofadventure #universalorlando pic.twitter.com/6LDE2KPZQ6

Previously, we shared photos of the train cars for the VelociCoaster that gave us an extremely detailed look at the coaster train cars. You can see those photos and read the details here. However, we could not imagine how the lights would look while the VelociCoaster was running at night!

Take a look at this screenshot from Midway Mayhem’s video, which shows clearly that every seat on the coaster train is illuminated. We suspect that the blue color could be a nod to Blue to Velociraptor from Jurassic World, which is, of course, the film this attraction is based on.

In addition to every seat being lit up in the dark, the front of the train is also illuminated! Making this coaster a beautiful addition to the skyline of Island’s of Adventure.

Related: VelociCoaster Rock Work Will Be Terrifyingly Close to Riders

The VelociCoaster is coming to Universal Orlando Resort’s Islands of Adventure theme park later this year. Subscribe to our newsletter below to be one of the first to know when this new attraction will open!

Are you scared to ride the VelociCoaster? Let us know if you are brave enough to ride this new attraction when it opens below!

We can help you book the perfect Universal Orlando vacation. Click here for more information!

Comments Off on VIDEO: Universal’s VelociCoaster Lights Up, Inches Closer to Opening