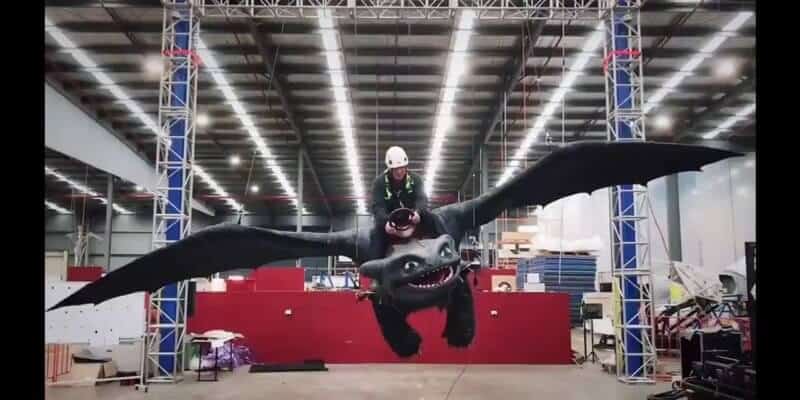 This is going to be a great year or theme park fans, especially those who love Universal!

Universal has just given us a first look at a brand new Toothless puppet/animatronic they have been working on! This comes as part of a special promotional commercial for Universal Studios Beijing which is set to open in 2021.

Universal gave fans a BIG look behind the scenes at what they have been working on for Universal Studios Beijing, and wow — we cannot wait for this park to open! You can see the video thanks to this Tweet from theme park reporter @themeparX on Twitter,

2021 is the year of Universal Beijing Resort and themeparX will be your top source of updates all the way through to the grand opening: https://t.co/HKZT0eJJV2 pic.twitter.com/HBMFKeUOmN

The entire video is packed with excitement! Did you catch Steven Speilburg? What about that crazy roaring dinosaur animatronic? My passport is READY and bags are PACKED for a trip to Beijing for the Grand Opening in May of this year!

You can see more photos and read about the new dinosaur animatronics that will be a part of the Jurassic World section of Universal Beijing here!

Although so many things got us overjoyed for this new theme park, one, in particular, caught our eye. This flying Toothless from the How to Train Your Dragon franchise blew us away.

So far Universal has not officially announced any How to Train Your Dragon attractions or shows for the park. However, it has been heavily rumored that a stage show featuring this intellectual property has been in development for the Beijing Park.

No confirmation on what exactly Universal will be using this flying Toothless puppet/animatronic for — but this certainly has us excited for the possibilities!

A land-based on How to Train Your Dragon is rumored for Universal’s new Epic Universe theme park in Orlando, but that project has been put on hold indefinitely due to the ongoing pandemic.

Are you excited for How to Train Your Dragon characters to come to Universal theme parks? Let us know in the comments!

We can help you plan the perfect trip for the Grand Opening of Universal Studios Beijing, click here for more information!

Comments Off on Universal Reveals Massive ‘How to Train Your Dragon’ Puppet!