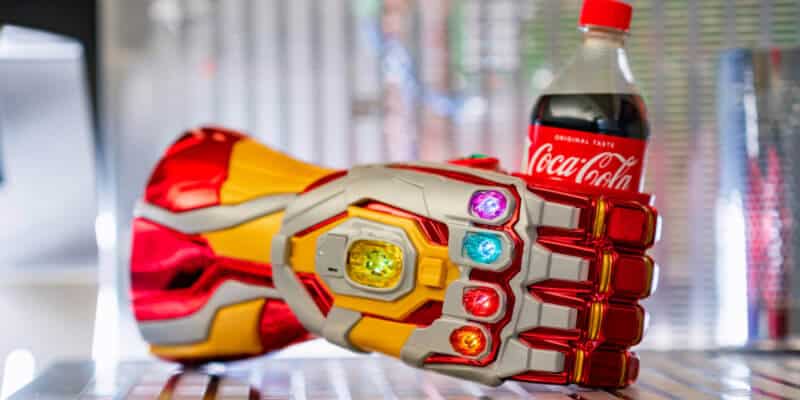 Whether it’s Avengers Campus, Magic Kingdom, or Batuu, it’s par for the course at Disney: there’s always going to be that one cool collectible that everyone wants. With Avengers Campus opening in just a few short weeks, we have our first look at what will definitely become a coveted souvenir: Iron Man’s infinity gauntlet.

Yes, fans can slip on Iron Man’s gauntlet glove — the same glove he used to save the world in Avengers: Endgame — as a soda holder when Avengers Campus opens in Disney California Adventure. What a way to feel like a superhero!

Avengers Campus will have no shortage of collectible souvenirs for those who are huge Marvel fans. Other fun pieces you can take home include red or blue glowing Pym Particle capsules, a supersized Pingo Doce soda can that can be filled with a Hulk-themed drink, and pint-sized mini steins (Pym style!) on an oversized beer flight board.

But it’s the gauntlet that fans are probably going to want the most, and with good reason. The souvenir collectible harbors all six Infinity Stones and they all light up, which makes the collectible even cooler.

Avengers Campus will be the first dedicated Marvel land at a Disney theme park. It will celebrate the comics and movies that are so beloved by the world! The grand opening of the land was supposed to happen back in June 2020 but was delayed because of the pandemic. Disney started on construction again as soon as it was safe with the goal of opening Avengers Campus in 2021, and lucky for Marvel fans they succeeded. Avengers Campus will officially open on June 4, 2021.

“From the futuristic architecture, theatrical lighting, unique audio, creative food, beautiful costuming and innovative merchandise, the land will be an immersive experience that we know our Guests are going to love,” Disneyland Resort President Ken Potrock said when describing Avengers Campus and the attraction’s progress during its construction period. It’s been a long ride, but now, with the release of a new menu, costumes, and now collectibles, it finally feels like Avengers Campus is on its way to becoming a real thing.

Disney CEO Bob Chapek recently said that Avengers Campus is “truly phenomenal” and we can’t wait to see what’s in store when it officially opens next month. Of course, those collectibles are going to be the first thing we try to get after getting some shawarma…

Are you going to try to get an Iron Man Gauntlet from Avengers Campus?