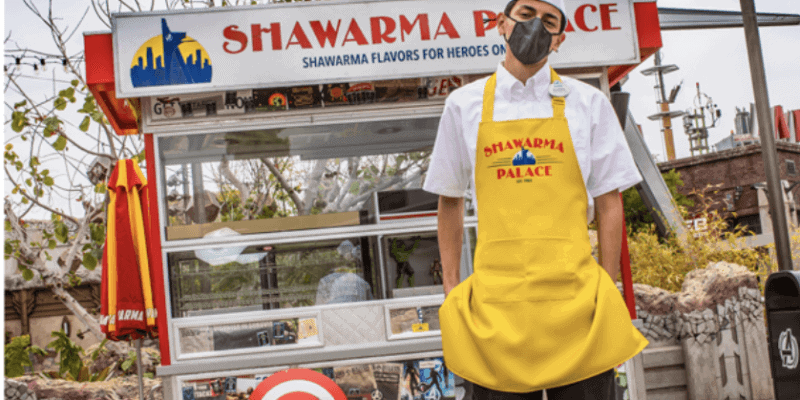 It is hard to believe, but Avengers Campus at Disney California Adventure Park is set to open in just a matter of weeks! The Marvel-themed land was originally set to open in July 2020, but that had to be pushed back when the theme park was forced to shut down due to the pandemic.

As Disneyland Resort has inched closer and closer to the opening of Avengers Campus, more details have been revealed about what Guests can expect in the new area.

From the entrance to Avengers Campus to the graffiti on the walls and where the new Spider-Man-themed ride — which will be called WEB SLINGERS: A Spider-Man Adventure — will be located, Disney has left no stone unturned when it comes to the details present at Avengers Campus.

In addition to the great atmosphere and attractions, Avengers Campus will be giving Guests some new food offerings that will be unique to that area of the park. Disneyland Resort President, Ken Potrock, recently showed an up-close look at the new Shawarma Palace food cart on Instagram, writing:

Imagining delicious shawarmas… is it time to open yet? #avengerscampus #disneyland #disneycaliforniaadventure

Avengers fans will see the cart decked out in a ton of Avengers memorabilia — including Captain America’s shield to news articles about the superhero’s escapades.

For those who may be unfamiliar with the Shawarma Palace reference, it is a small moment that happens in the post-credit scene of the first Avengers movie. Tony Stark — aka Iron Man — had mentioned eating Shawarma previously and the Avengers gather there for the delicious treat after the film’s final battle.

Even if you are familiar with the great post-credit scene from Avengers, you may still be unfamiliar with what exactly shawarma is. Well, shawarma is meat that is seasoned and then stacked on a spit and slow-roasted and sliced off to order. It is often served as a sandwich or a wrap.

The Shawarma Palace at Avengers Campus will serve two types of shawarma to satisfy carnivores and vegetarians alike. Details were revealed by Disney Parks Blog:

Next, the Avengers have invited the crew of their favorite “shawarma joint” in New York, the Shawarma Palace, to open a second location at the Campus. Enjoy favorite shawarma-inspired snacks at this food cart, which is decked out with memorabilia since the Shawarma Palace owners are huge Avenger fans.

For Guests who would like to see what other food offerings Avengers Campus has, they can head over to Pym Test Kitchen. The new Disney dining location will offer foods that have been experimented on by Dr. Pym, so you can expect to see some wild portions and interesting flavors.

Avengers Campus will be opening on June 4 at Disney California Adventure Park and both Shawarma Palace and Pym Test Kitchen will be open for Guests to experience.

Will you be trying Shawarma Palace when Avengers Campus opens? Let us know in the comments!

Comments Off on PHOTO: New Look at Shawarma Palace at Avengers Campus