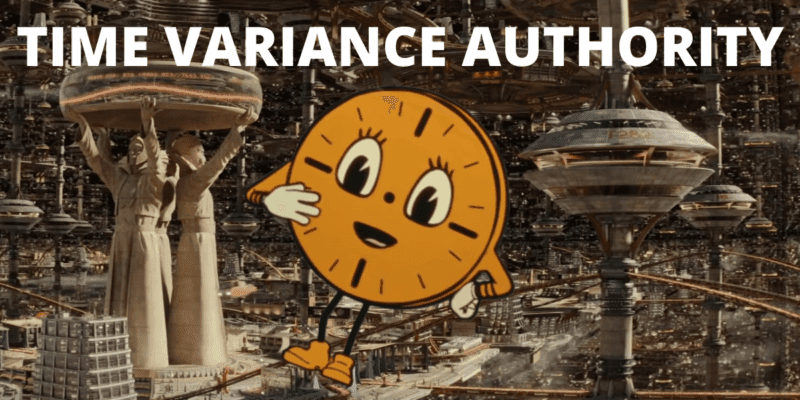 Marvel fans can finally watch Loki since it premiered on Disney+ on June 9, 2021. The latest Marvel original TV show is expected to be the biggest series yet and fans are gearing up to catch every Easter Egg in Loki.

Marvel’s first two Disney+ series, WandaVision and The Falcon and the Winter Soldier, were both massive successes but they were both planned as limited series. The anticipation for Loki has reached such a fervor that Kevin Feige’s Marvel Studios may have secretly renewed not only for a second season but a third!

There is not much known about the specific plot details for Loki but fans know that Tom Hiddleston will be joined by Owen Wilson’s character Mobius M. Mobius and that the Time Variance Authority will play a huge role in the series.

Manager of the Time Variance Authority

In Marvel Comics, the Time Variance Authority has a very strict corporate structure. At the bottom are the robotic Minutemen. Then you have middle management agents also called Justices like Agent Mobius and above them are the judges like Judge Renslayer (Gugu Mbatha-Raw) and the administrators.

In Marvel Comics, the administrators and justices are all clones of the same person and are created each time a new reality is created. The TVA also employs the Chronomonitors (not to be confused with Chronicoms seen on Agents of SHIELD). The Chronomonitors are faceless beings who man the desks at the TVA and each one is assigned to its own timeline.

Who are the most important members of the Time Variance Authority?

All of these drones, monitors, agents, administrators, and judges are all led by the director Mr. Alternity. Mr. Alternity reports directly to the timekeepers who created the Time Variance Authority and the Null-Time Zone in which it operates. In the latest Loki trailer, the Frost Giant Prince calls the timekeepers who run the TVA “space lizards.”

The timekeepers were created by a being known as “He Who Remains” just before the death of the universe. They have the power to manipulate time and temporal energy. In the Marvel Cinematic Universe, it appears that they created the Time Variance Authority, while in the comics it was the last director of the TVA that created them.

Who Is Mr. Alternity And What Are His Goals?

While the Time Variance Authority says that its goal is to “protect the sacred timeline”; in Marvel Comics they do this by eliminating variants and other threats that deem too dangerous to exist. At one point the timekeepers created a being called Immortus and tasked him with eliminating Nexus Beings.

Sharp MCU fans will remember the Easter Egg from WandaVision that hinted at her role as a Nexus Being. Nexus Beings are powerful individuals with the ability to affect not only probability but the future, altering the flow of the Universal Time Stream.

As director of the Time Variance Authority, Mr. Alternity is in charge of making sure that the TVA eliminates variants throughout the main MCU timeline. Below him are other administrators like Mr. Orobourous, Mr. Paradox, and Mr. Tesseract. The Loki trailers have not revealed yet if Mr. Alternity will appear or what his role will be in the show.

What Are Mr. Alternity’s Powers?

Mr. Alternity does not appear in many Marvel Comics. He is mainly the background director who orders around more important characters like Mobius M. Mobius. He and all the other middle management characters are all clones of each other and not display any other superpowers.

All of the clones in the TVA were based on a real Marvel writer, Mark Gruenwald, notable for his work on Captain America and creating the character of U.S. Agent/ John Walker (played by Wyatt Russell on The Falcon and The Winter Soldier). Gruenwald was an Editor-in-Chief for Marvel as well as the continuity expert. His job was to keep the Marvel Comics timeline in order.

Origin of the Time Variance Authority

The infinitely vast bureaucracy that is the Time Variance Authority was created at the end of the universe by the last remaining director of the TVA. Its paradoxical creation and how the Timekeepers fit in will hopefully be clarified after June 9, 2021 – the Loki release date.

We know that the TVA has its mascot – Miss Minutes, the smiling clock with a southern accent that welcomes Loki (Tom Hiddleston) and “catches him before he stands trial. Marvel even says “Miss Minutes keeps the Time Variance Authority ticking like clockwork, in more ways than one.” So there is sure to be more information on her yet to come.

Who devised the Time Variance Authority?

In the Loki series, it appears that the TVA was devised by the Timekeepers instead of the other way around. The three powerful entities created the Null-Time Zone, a place outside of time where they and their agents could monitor the timelines and make sure that it goes along what they consider the “scared timeline” and eliminate any variants.

While the origin of the TVA is tied to the “He Who Remains” it is not clear which of the directors became “He Who Remains” perhaps it could have been Mr. Alternity. The agency was originally a parody of the British comics series 2000 AD.

Why was the Time Variance Authority created?

In Marvel Comics, the creation of the Timekeepers also created the Time Twisters. They are the opposites of the Timekeepers, a trio of powerful beings who altered timelines and put them on paths towards peril.

One of the main antagonists of the TVA is Kang the Conqueror. Judge Renslayer is expected to be an adaptation of the comic book character Ravonna Renslayer/ Terminatrix, the time-traveling lover of Kang the Conqueror, who is set to appear in Ant-Man and the Wasp Quantumania (February 17, 2023).

Kang uses time travel to change the timeline so that he can rule it. He rules another domain that exists outside time known as the Chronopolis. Though that may now exist in the Quantum Realm.

However, in the Marvel Cinematic Universe, it was recently revealed that everyone who works for the Time Variance Authority is actually variant. The Timekeepers – who are not actually the Timekeepers – have been abducting them and brainwashing them.

When the female variant of Loki known as Sylvie enchants Hunter C-20 (Sasha Bianca Lane) she pulls a memory from her life before the TVA. The same thing happens to Hunter B-15 (Wunmi Mosaku) and she turns on Judge Ravonna Renslayer.

And Loki also revealed that in the Marvel Cinematic Universe the Timekeepers are not the all-powerful “space-lizards” that we were led to believe. They were actually robots that could have been created by Kang the Conquer, the Beyonder or an evil variant of Loki.

When Did The Time Variance Authority First Appear In The Marvel Universe?

The Time Variance Authority first appeared in Thor #371 in 1986. They were created by Walter Simonson and Sal Buscema and have gone to cause trouble for many Marvel characters like the Fantastic Four.

It was Justice Peace who brought Marvel’s first family to the Null-Time Zone to stand trial for meddling with time. Justice Peace is the TVA’s bounty hunter, who rides through time on a motorcycle made to look like a traffic signal. You can’t make this up.

One of the most important appearances of the TVA in the Marvel Universe was during the Trial of She-Hulk. Jennifer Walter – who will be getting her own Disney+ series starring Tatiana Maslany – tried to change the timeline to save Hawkeye/Clint Barton after he was killed by the Scarlet Witch before the House of M.

Purpose of the Time Variance Authority

The essential purpose of the TVA is essentially to be the time police. In the Loki trailer, we see Tom Hiddleston’s trickster god being escorted from the Null-Time Zone by a group of armed soldiers into an alternate timeline.

While the goal of this mission is not revealed in the trailer, he may be rounding up another variant for judgment and elimination. Owen Wilson’s Mobius shows Loki a screen monitoring new timelines that they want to curtail.

What is the mission of the Time Variance Authority?

In order to eliminate variations of their “scared timeline”, the TVA holds trials for anyone who tries to alter the timeline – whether they intend to or not. We can see one variant being erased before Loki heads to his trial.

Loki is then recruited by Mobius rather than eliminated but the show has yet to tell us why Loki is spared. Mobius says he wants Loki’s “unique perspective”. However, Loki is unlikely to remain helpful for long. That secret message included in the Loki logo hints that the quintessential shapeshifter will use his ability to escape.

Who Are the Main Antagonists of the Time Variance Authority?

The main antagonist from Marvel Comics is Kang the Conqueror but it unlikely he will show up in the Loki series as more than a cameo since he set to play a bigger role in Ant-Man and the Wasp: Quantumania. The Tom Hiddleston-led series will have to find its main antagonist elsewhere.

So, who are the Timekeepers going up against now? Our best guess is the Time Twisters. Like the Timekeepers, they can manipulate temporal energy. From their origins, at the end of the Marvel Universe, the Time Twisters traveled backward through time in 30-century increments to discover the origin of the universe. But they do not care about the destruction and chaos they left in their wake.

Another antagonist is Professor Justin Alphonse Gamble, a former TVA Agent who goes up against the Incinerators – a band of robots created by the TVA to discontinue timelines. After leaving the TVA he lived in New York and wrote a Broadway play about his life.

How Does the Time Variance Authority Affect the Rest of the Marvel Universe?

When the TVA finds someone guilty of messing with time, they erase them from existence. They threatened to do this to the Fantastic Four, who used the Cross-Time Central Express Railroad to travel through time.

They use a weapon called the Retroactive Canon, or Ret-Can, to erase variants. The name is a play on Retcon (retroactive continuity), the term to describe how storytellers like Marvel Comics use new information to rewrite or change previous events.

While investigating a timeline in which Fantastic Four villain Galactus became a black hole, the TVA accidentally created the Time Bubble. The Time Bubble stretched over a fifteen-year period and prevented any time travel from passing through that era from either direction.

The Time Variance Authority is sure to be a central part in at least the first season of Loki and the possible later season. The official Marvel description is:

This version of Loki is not the one who was redeemed during Thor: Ragnarok (2019). He is fresh off the mischief from Avengers (2012) so his time travel adventures may bring the MCU back to its roots.

Let us know in the comments below if you are ready for Loki to premiere on June 9.

Comments Off on What Is the Marvel Time Variance Authority?