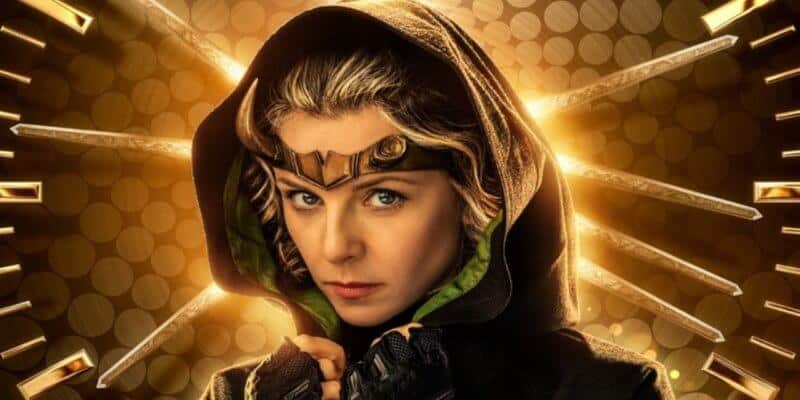 In the most recent second episode (“The Variant”) of Marvel’s hit new series Loki, fans were finally introduced to someone they had been waiting to see since the series was announced — a female version of the God of Mischief. Up until now, fans expected this form of Loki to be Lady Loki, but new merchandise may reveal that she is actually another big character from Marvel Comics.

Official Marvel merchandise has hit the European website Zavvi, where users can buy a helmet replica set that contains both Loki and Lady Loki’s helmets. The merchandise goes a step further than previous product offerings and confirms that Lady Loki is, in fact, named Sylvie. The Certificate of Authenticity reads, in part:

This document certifies that these horned helmets were inspired by the helmets worn by Loki and Sylvie in the Marvel series: Loki.

Eagle-eyed viewers also pointed out that Loki had seen Sylvie’s name on a sheet of paper while looking through documents and doing research at the TVA.

While it may appear that this variant of Loki may just have the name Sylvie, there could be more to her name than meets the eye. Her name could indicate that Loki will introduce viewers to another character that can be found in the Marvel Comics — the Enchantress.

There is more than one Enchantress in the Marvel Comics, but Loki may have introduced us to the one created by Sylvie Lushton — a normal girl who lived in Oklahoma. According to Marvel Fandom Wiki, Sylvie lived an average life until Asgard moved to Oklahoma:

Not long after that Sylvie woke up one day with magical powers. Unbeknownst to Sylvie, these powers were given to her by Loki for yet unknown purposes. With her new powers, Sylvie moved to New York City to become a superhero and join the Avengers. She chose to take on the name and style of Amora the Enchantress, and speaking in a faux Asgardian manner.

Loki viewers took to social media after meeting Lady Loki and shared their theories as to why they believe that she is in fact Sylvie Lushton and that we may be given that twist later in the season.

Did anyone else notice of the horns is missing from her crown? It looks melted off not chopped. Is it because she’s an imposter? Keep wondering if she’s Enchantress or Lady Loki? #loki #ladyloki #enchantress #sylvie #LokiWednesdays

Did anyone else notice of the horns is missing from her crown? It looks melted off not chopped. Is it because she’s an imposter? Keep wondering if she’s Enchantress or Lady Loki? #loki  #ladyloki #enchantress #sylvie #LokiWednesdays  @LokiOfficial @AngryJoeShow @Nerdrotics https://t.co/ebhdLo0zV8

Geek Republic Media also pointed out that, even though Marvel was calling her Lady Loki, they didn’t believe that she is a Loki variant at all:

Can’t fool us, @Marvel and @Disney, just because she looks like Lady Loki, doesn’t mean she is! We are calling it, Enchantress, all the way! #Loki #enchantress #LadyLoki

Can't fool us, @Marvel and @Disney, just because she looks like Lady Loki, doesn't mean she is! We are calling it, Enchantress, all the way! #Loki #enchantress #LadyLoki https://t.co/bFFyUVJsv2

It is important to note that Disney and Marvel have not confirmed that Lady Loki/Sylvie is the same Sylvie Lushton who becomes the Enchantress. Marvel is not one for giving confirmation on anything that involves bringing new characters in until they choose to, or until the big reveal happens. However, when it comes to details like two characters both related to Loki having the same name, there may be no such thing as a coincidence.

It is also worth noting that Loki’s Sylvie wears horns that are inspired by the “God of Stories” version of Lady Loki in Marvel Comics [below]. So, it is possible that she will be revealed to be both the Enchantress and a version of Loki simultaneously.

Loki is dropping new episodes every Wednesday on Disney+. Episodes 1 and 2 are currently available to stream.

Do you think that Lady Loki/Sylvie is actually Sylvie Lushton the Enchantress? Let us know in the comments!