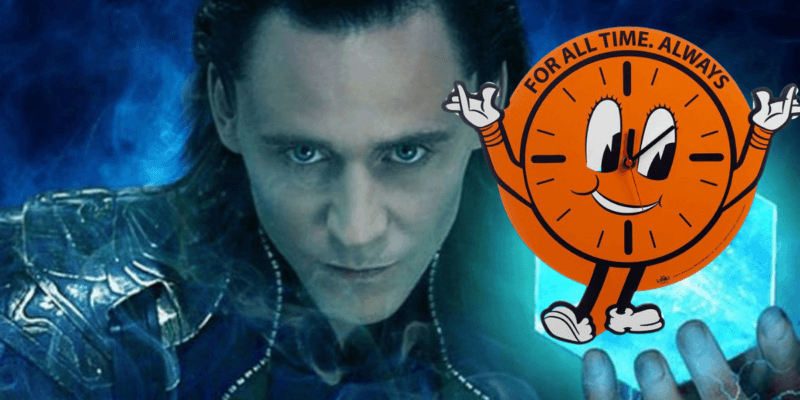 Fans are shaking with anticipation for Loki to come to Disney+ on Wednesday, June 9, 2021. Ahead of the premiere, the God of Mischief himself seems to be stoking the excitement by sending out encrypted messages via Twitter.

The messages are coming to fans via the Miss Minutes Twitter account – which has not been officially verified yet but is followed by Marvel Studios Executive Producer and Loki head writer Michael Waldron and show writer Eric Martin.

Miss Minutes is the cheerful yet creepy mascot for the Time Variance Authority or TVA. Marvel Comics time cops who have apprehended Loki after his escape with the Tesseract/ Space Stone in Avengers: Endgame (2019).

The messages began on May 30th with the first appearance of the ruins like those from Norse mythology:

Fans were only able to translate a bit of the message being about Mobius. Up until this, the Miss Minutes feed had been tweeting a mix of information reposted from the office Loki Twitter feed, jokes about time travel, and TVA announcements. Include some that have a sinister tone, such as “The Timekeepers are watching.”

The timekeepers are watching.
👀👀👀

The Timekeepers are the lizard aliens that run the time travel organization that fans will get to know better in the third Disney+ original series that builds on the Marvel Universe post blip that we saw in WandaVision and The Falcon and the Winter Soldier.

Later that day after the initial hack, Miss Minutes also Tweeted out more ruins that translated to “Absurd, lizards, repressed.”

The broken translation was taken to mean that Loki (Tom Hiddleston) was taking over the feed from inside the time travel bureaucracy. May 30 ended with a Tweet that translated to “Stupid clock“. Apparently, the trickster god is not a fan of the southern-accented Miss Minutes.

Then Miss Minutes took back over her feed for a bit to promote Loki’s upcoming release date with a clip from the Loki trailer. Unfortunately, it wasn’t the one with the shirtless Tom Hiddleston that had fans drooling the other day.

The action started back up again the next day with the trickster finally gaining control of the mascot’s Twitter account for a solid run of tweets. All were released in the Norse ruins that come from Loki’s homeworld of Asgard.

While the Marvel Cinematic Universe shows the Asgardians speaking English and Thor (Chris Hemsworth) reveals he took Groot as an elective. In Marvel Comics the gods of Asgard actually speak Allspeak or All-tongue. A language that everyone hears in their native tongue.

The new series of tweets from the Miss Minutes account began with this:

This translates to “hello is this stupid thing finally working?“. It is the clearest message that fans have received so far. It looked like Loki has successfully broken through the TVA’s defenses.

The next has the God of Mischief threatening the Time Variance Authority once he ultimately betrays Owen Wilson’s character Mobius M. Mobius for his own selfish gains. Loki says “Once I escape this hell prison they call the TVA I swear I’m gonna burn everything to the ground.”

The final message teases that the show and all the mischief that the trickster god will bring is coming in eight days. Now the feed seems to have resumed normal operations, but Marvel fans are eagerly keeping an eye on it for any more clues as to what they can expect in Marvel’s Loki series.

Miss Minutes also apologized for the interruption and then confirmed it was the quintessential shapeshifter behind all the shenanigans saying:

Many are asking about the #Loki variant that we have since discovered hacked the servers. No need to worry about him, the TVA is taking care of the issue! Just as soon as we find him…

Many are asking about the #Loki variant that we have since discovered hacked the servers.
No need to worry about him, the TVA is taking care of the issue!
Just as soon as we find him…

The official description from Marvel Studios does not give much away about their latest original series:

In Marvel Studios’ “Loki,” the mercurial villain Loki (Tom Hiddleston) resumes his role as the God of Mischief in a new series that takes place after the events of “Avengers: Endgame.” Kate Herron directs and Michael Waldron is head writer

What Loki will get up to on his solo outing remains a closely guarded secret by Kevin Feige’s Marvel Studios. Marvel fans are expecting to get their first look at the Marvel Multiverse before Doctor Strange in the Multiverse of Madness (March 25, 2022).  The Frost Giant Prince will also meet other variants of himself as he travels through historical events.

The Prince of Asgard that fans are getting in this series is already a new variant and is not the same Loki that was redeemed in Thor: Ragnarok (2018) when he helped his brother Thor stop their sister Hela (Cate Blanchett). That version of Loki was killed by Thanos (Josh Brolin) in Avengers: Infinity War (2018), which at the time Marvel fans thought would be his last Marvel movie in the MCU.

It’s certain to be a fun ride, so come back here for all the Loki coverage that you need.

Comments Off on Loki Takes Over Twitter to Reveal Coded Messages – Is It All a Trick?