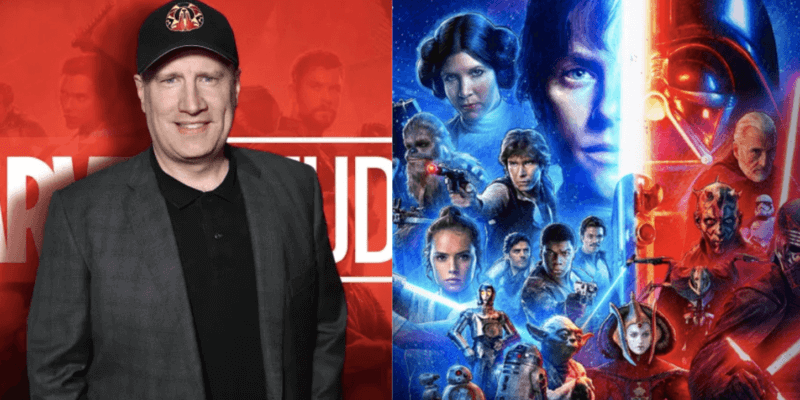 In September 2019, it was announced that Marvel Studios head Kevin Feige was in the early stages of developing a Star Wars movie.

At the time, little was known about the project and our previous coverage of the Kevin Feige Star Wars film notes:

He also gave the Marvel fandom the scariest live-action supervillain in recent memory with Thanos (Josh Brolin) and his Infinity Gauntlet.

Now, new details have been released and it appears that — after about 16 months and an unprecedented pandemic that temporarily delayed just about all of The Walt Disney Company’s projects, including Marvel and Lucasfilm productions — Feige’s foray into a galaxy far, far away is finally moving forward.

Related: OpEd: Why Dave Filoni Should be the Kevin Feige of ‘Star Wars’

After penning Doctor Strange in the Multiverse of Madness and serving as head writer and exec producer on the upcoming Disney+ series Loki, Michael Waldron is looking to stay in business with Walt Disney Studios in a big way.

Sources tell Deadline Waldron has been set to write a new Star Wars feature film that Kevin Feige, President of Marvel Studios and Chief Creative Officer of Marvel, will develop and produce for Lucasfilm and Disney. This just one part of the recent deal Waldron signed with the studios that will keep him in business with Disney for some time.

At this time, neither Disney nor Lucasfilm executives have made an official statement regarding Feige’s upcoming Star Wars movie. Although the Skywalker Saga officially ended with the sequel trilogy — Star Wars: Episode VII – The Force Awakens (2015), Star Wars: Episode VIII – The Last Jedi (2017), and Star Wars: The Rise of Skywalker (2019) — familiar characters are still cropping up in more recent additions to the Star Wars story.

For example, Luke Skywalker (a CGI version of Mark Hamill during the original trilogy era) recently showed up to rescue Grogu (AKA The Child AKA Baby Yoda) from near-certain death in the Season 2 finale of Jon Favreau and Dave Filoni’s hit, The Mandalorian.

Furthermore, the second season of the popular streaming series also brought Boba Fett (Temuera Morrison) back from the dead — literally, we all thought he was a goner in the Sarlacc pit in Star Wars: Episode VI – The Return of the Jedi (1983) and confirmed we will see a spinoff series featuring the bounty hunter set on Tatooine.

This proves there is plenty of room for Feige to bring back characters and locations that are familiar to the Star Wars fan base, while still bringing his own Avengers: Infinity War (2018) and Avengers: Endgame (2019)-like flair to his upcoming movie.

Kennedy shared that the next Star Wars theatrical release will be Patty Jenkins’s (Wonder Woman 1984, I Am the Night) Star Wars: Rogue Squadron (2023), followed by the 2025 Star Wars movie that Taika Waititi (The Mandalorian, Thor: Love and Thunder, Avengers: Endgame, JoJo Rabbit) has already begun writing.

The next Star Wars feature film following the two mentioned above is slated for 2027. There is a chance that this could be Feige and Waldron’s project, but nothing has been confirmed at this time.

Stay tuned to Inside the Magic for more about Kevin Feige’s journey into Star Wars territory. Are you excited to learn more?