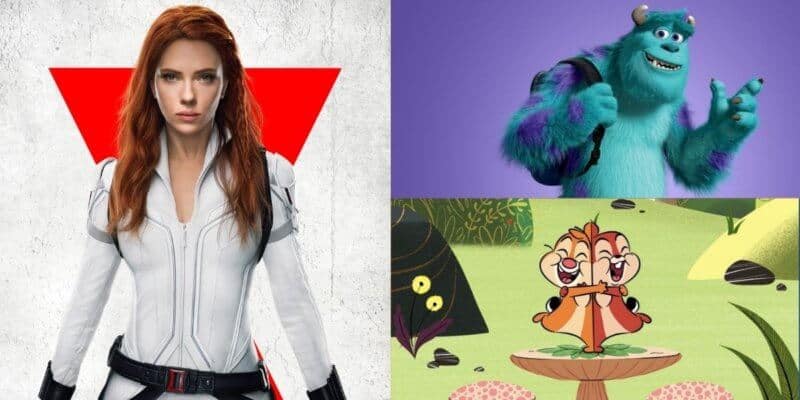 Disney+ has definitely stepped up their streaming service game in the last couple of months!

Since the release of Disney+ in November 2019, we have always known they would showcase such films as Disney’s Frozen and Disney’s The Little Mermaid, but no one was truly ready to be immersed in series such as Star Wars: The Mandalorian and Marvel’s The Falcon and the Winter Soldier.

Disney+ is home to hundreds of movies and provides Pixar, Marvel, Star Wars, National Geographic, and of course Walt Disney Studios, Walt Disney Animation Studios, and Disney Channel collections. With all the new Disney movies, shows, and shorts coming out month after month, we understand how keeping up with new content can be overwhelming, so we have broken down everything you need to know about what is coming this July on Disney+, courtesy of What’s On Disney Plus.

“Monsters At Work” takes place the day after the Monsters, Incorporated power plant started harvesting the laughter of children to fuel the city of Monstropolis, thanks to Mike and Sulley’s discovery that laughter generates ten times more energy than screams. It follows the story of Tylor Tuskmon, an eager young monster who graduated top of his class at Monsters University and always dreamed of becoming a Scarer, until he lands a job at Monsters, Incorporated and discovers that scaring is out and laughter is in.

Placed undercover at a boarding school known as The Institute, a group of orphans must foil a nefarious plot with global ramifications while creating a new sort of family along the way. Based on the bestseller by Trenton Lee Stewart which Time Magazine called “one of the best young adult books of all time,”The Mysterious Benedict Society” stars Emmy® Award winner Tony Hale in the titular role and features a standout ensemble of young actors.

“Star Wars: The Bad Batch” follows the elite and experimental clones of the Bad Batch (first introduced in “The Clone Wars”) as they find their way in a rapidly changing galaxy in the immediate aftermath of the Clone War. Members of Bad Batch—a unique squad of clones who vary genetically from their brothers in the Clone Army – each possess a singular exceptional skill that makes them extraordinarily effective soldiers and a formidable crew.

Gordon Ramsay heads to the land of fire and ice during the Icelandic summer to learn secret cooking techniques utilizing the volcanic landscape. He fishes in a glacial river for wild salmon and cooks bread in geothermally heated soil before heading north to the sparsely populated Westfjords. After sampling fermented shark and diving for scallops in the freezing fjords, he joins Iceland’s first Michelin-rated chef, Ragnar Eiríksson, for a feast in a rainstorm.

Here is a sneak peek from the National Geographic YouTube channel,

“Loki” features the God of Mischief as he steps out of his brother’s shadow in a new series that takes place after the events of “Avengers: Endgame.” Tom Hiddleston returns as the title character, joined by Owen Wilson, Gugu Mbatha-Raw, Sophia Di Martino, Wunmi Mosaku and Richard E. Grant. Kate Herron directs “Loki,” and Michael Waldron is head writer.

Gordon Ramsay is pushed to his limits in the Smoky Mountains. In his quest to unearth the region’s culinary secrets, Gordon must rappel down a treacherous waterfall, kayak through raging rapids, and trek deep into the forest, attempting to find the most delicious ingredients in this magnificent mountain range. His culinary rival at the big cook is chef William Dissen, named one of America’s “Most Sustainable Chefs,” who knows these mountains, rivers and forests like the back of his hand.

When an ambitious, buttoned-up US Marshal inherits a big unruly dog, he soon realizes the dog he didn’t want may be the partner he needs. “Turner & Hooch” stars Josh Peck as Scott Turner, son of Detective Scott Turner portrayed by Tom Hanks in the 1989 film of the same name.

Gordon Ramsay discovers the culinary secrets of the country’s legendary Oaxaca region, where mole reigns supreme. In addition to learning to make the storied chocolate- and chili-infused sauce, Gordon must rappel down a cliff in search of delicious butter worms, harvest the honey sacs from burrowing ants and fend off angry wasps in search of their coveted larva. In his effort to measure up to acclaimed Mexico City chef Gabriela Cámara, he will also engage in the punishing physical process of harvesting agave plants to make mescal.

“Chip ‘N’ Dale: Park Life” follows two tiny troublemakers trying to live the good life in a big city park while having giant-sized, sky-high adventures. Disney’s beloved chipmunks, nervous worrier Chip and laid-back dreamer Dale, make the perfect odd couple. They’re best buddies and they drive each other nuts! In their perpetual pursuit of acorns, these ultimate underdogs are joined by Pluto, Butch and other iconic Disney characters as they face down bullies great and small. Combining classic-style cartoon comedy with contemporary storytelling, the 36 seven-minute episodes are directed by Jean Cayrol and produced by Marc du Pontavice at Xilam Animation.

Turning the Tables with Robin Roberts

Get personal with Robin Roberts and some of Hollywood’s groundbreaking women as they bear witness to their incredible journeys on their path to purpose. Each episode is a profound conversation filled with emotion and inspiration. Listen to never-before-heard stories of how these groundbreakers came face-to-face with their vulnerability, authenticity and intuition. Discover their commonalities and learn how their stories and experiences created room for expansion and evolution.

All four episodes will arrive on July 30th

If you are not yet signed up for Disney’s streaming service, Disney+, you can get started right here!

Which Disney+ series are you looking forward to? Let us know in the comments below!