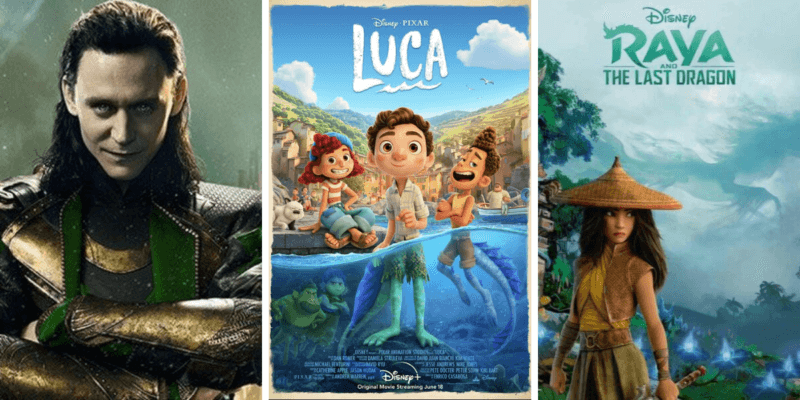 Disney+ has only been around for about two years, but in that time, they have amassed the ultimate collection of Disney, Star Wars, and Marvel films and television shows.

The streaming service has everything from classic Disney films like Cinderella and The Rescuers to the original Star Wars trilogy. There are also Disney+ hit new shows from both Star Wars and Marvel Studios, like The Mandalorian, The Falcon and the Winter Soldier, and WandaVision.

In May, Disney+ is bringing viewers more streaming smash hits, such as the Star Wars: The Bad Batch, which will debut on May 4.

It will also bring viewers the much anticipated Disney prequel film, Cruella, which examines the classic character Cruella De Vil before she became the classic villain we know and love (or love to hate). Cruella will be available on Disney+ through Premier Access starting May 28.

With summer quickly approaching, let’s take a look at what is coming to Disney+ in the month of June! Hold onto your hats ladies and gentlemen, because there are some big titles!

Gordon Ramsay journeys to the wilds of south central Texas and meets some tough, gritty characters to learn what it means to be from the Lone Star State. He will herd cattle with the help of a helicopter, hunt for venomous rattlesnake in the backcountry and go on a night hunt for invasive and ferocious feral hogs. He’ll need to dig deep and toughen up if he wants to show the acclaimed James Beard Award-winning chef Justin Yu and a group of locals that he has what it takes to cook his way through their state.

Raya and the Last Dragon was officially released on Disney+ on March 5, but the movie was only available on Premier Access, meaning those who wanted to watch the new film had to be members of Disney+ and then pay an additional $29.99. However, beginning June 4, all Disney+ subscribers will be able to stream the hit movie.

For those who unfamiliar with Raya and the Last Dragon, here is the film’s synopsis:

After getting ousted from the NCAA, a hothead men’s basketball coach must take a job at an all-girls high school. He soon learns that teenage girls are more than just X’s and O’s; they require empathy and vulnerability — foreign concepts for the stoic Coach Korn (John Stamos). By learning how to connect with his players, Marvyn starts to grow into the person he’s always hoped to be. The girls learn to take themselves more seriously, finding their footing both on and oﬀ the court.

Gordon Ramsay explores the rugged landscape of Portugal, where the simple way of life is evident in the country’s incredible cuisine. Gordon will chase black pigs across a farm to feed them, brave giant pounding waves for barnacles that cling to the rocky coastline and the open seas to fish for iconic sardines. He’ll need to roll up his sleeves and bring his A-game in order to beat local chef, Kiko Martins, in an epic feast for the Mayor of Nazaré.

The highly anticipated series from Marvel Studios starring Tom Hiddleston as the God of Mischief is finally getting its Disney+ premiere!

In Marvel Studios’ “Loki”, the mercurial villain Loki (Tom Hiddleston) resumes his role as the God of Mischief in a new series that takes place after the events of “Avengers: Endgame”.

After a very successful Season 1, Zenimation Season 2 will premier on Disney+. For those unfamiliar with the series, here is the official Disney description:

Unplug, relax and refresh your senses for a moment of midfulness with Walt Disney Animation Studios’ Zenimation. Whether it’s baby Moana being called by the ocean, Anna and Kristoff walking through an icy forest, or Baymax and Hiro flying over San Fransokyo, these iconic scenes become an aural soundscape experience like no other.

Gordon Ramsay discovers why Maine, United States, is called the “lobster capital of the world.” Along the rugged coastline, he struggles to keep up with a team of lobster fisherwomen, dives for clams, harvests oysters, forages in freezing waters and tests his lumberjack skills. Can he earn the status of a tough Mainer as he tests his culinary skills against local legend chef Melissa Kelly, a two-time James Beard award-winner?

Set in a beautiful seaside town on the Italian Riviera, the original animated feature is a coming-of-age story about one young boy experiencing an unforgettable summer filled with gelato, pasta and endless scooter rides. Luca shares these adventures with his newfound best friend, but all the fun is threatened by a deeply-held secret: he is a sea monster from another world just below the water’s surface

Gordon Ramsay travels to the untouched peninsula of Istria, Croatia, for ingredients that rival the best of Italy in world-class quality. He fights for oxygen freediving for local mollusks, risks his pride fishing for rare cuttlefish and chases after goats for cheese and donkeys for milk. He learns the secrets to finding exquisite truffles and making exceptional olive oil before testing his newly found skills against local chef David Skoko.

Four orphans, each possessing a unique skill, are summoned to a boarding school known as The Institute by an eccentric benefactor who wants them to stop a plot that could have consequences on a global level.

After a phone mix-up leads to a case of mistaken identity, two competing babysitters come face-to-face. Their expected dull evening of babysitting suddenly turns into a crazy adventure when one of the kids sneaks away for a concert…and the crew must turn the city inside out in a search for the wild child.

Gordon Ramsay explores the enchanted island of Puerto Rico, from the bright blue sea to the lush mountains of the interior. Along the way, he learns about Hurricane Maria’s recent devastating toll on the island and how food shortages have prompted locals to push for food independence. On this epic adventure, Gordon goes spearfishing, takes a helicopter ride to an organic coffee plantation, and rappels down a waterfall for delicious river shrimp. Throughout his journey, he is hosted by laid back surfer-chef José Enrique, who turns up the gas at the final cook.

If you are not yet signed up for the streaming service, you can get started here.

Which June premiere are you most excited to see on Disney+? Let us know in the comments!