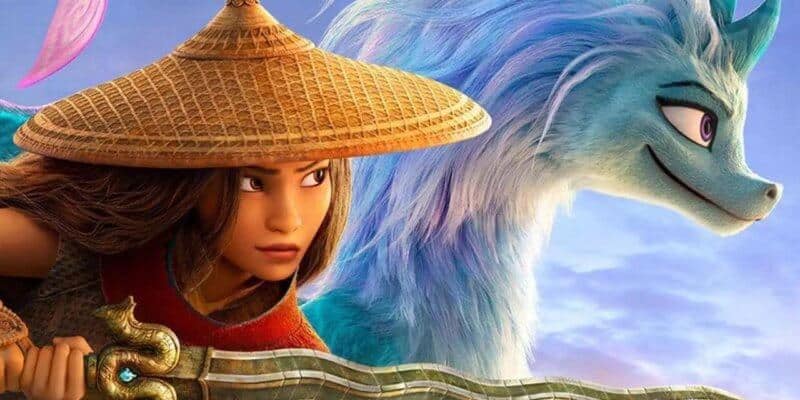 See the Movie Yourself: ‘Raya and the Last Dragon’ Preorder and Tickets Now on Sale

Plot of Raya and the Last Dragon

Disney provided the following information so audiences can get a better understanding of the plot and the main conflict in Raya and the Last Dragon.

From Walt Disney Animation Studios comes the epic adventure “Raya and the Last Dragon,” set in the fantasy world of Kumandra, where long ago humans and dragons lived together in harmony. But when an evil force threatened the land, the dragons sacrificed themselves to save humanity.

Now, 500 years later, that same evil has returned and it’s up to a lone warrior, Raya, to track down the legendary last dragon to restore the fractured land and unite its divided people…

Raya’s quest to find the last dragon, destroy the Druun, and save her world is also a journey of self-discovery—a quest filled with danger, adventure, humor and new friendships, yet tinged with regret, loss and anger born of the need to revenge a wrong. What Raya learns, and comes to believe, is bigger than all of us: we can trust, we can work together, we can unite. And, most importantly, we must.

Note that this isn’t your classic fairy tale, it’s not a musical full of Disney songs, and Raya is an entirely new character not based on a Southeast Asian legend. However, her gumption and strength, combined with the friendship and wisdom she finds in Sisu, make her an admirable character by the time the film has finished. Raya’s nemesis, Namaari, isn’t even the true villain of the movie. So no, this isn’t a film that follows the classic Disney Villain trope or magical plot — it is so much more than that.

More Information: How to Watch ‘Raya and the Last Dragon,’ the New Disney Princess Movie

Raya is the main protagonist of Raya and the Last Dragon. She is a headstrong lone warrior who is completely determined to find the last dragon and save her people — most importantly, her father.

As described by Disney and Kelly Marie Tran, voice of Raya:

Raya is a proud Guardian of the Dragon Gem, a title she holds alongside her beloved father Benja, the Chief of the Heart lands. Her world is turned upside down when the Gem is broken, and her father is turned to stone. Now on a mission to save the world, she’s grown up to be a resilient warrior whose wit is as sharp as her blade.

“Raya is such an incredible character,” says Tran. “In the beginning of the movie, when we first meet Raya as a young girl, she experiences something traumatic that shapes the way that she sees the world. When we meet Raya later when she’s older, she is seeing the world through this lens of not being able to trust anyone. She’s had to find a way to survive in a world that has become pretty dark, and it’s cool to see her come from that and try to learn how to trust again.”

You may be wondering, how old is Raya, and how could Raya be considered a Disney Princess?

Like many of the other Disney Princesses, Raya falls into the late-teens to early-twenties age range. When the film begins, she is quite young, appearing to be somewhere between 10 and 12 years old. Soon, we skip a few years ahead and see her all grown up but appearing to be no more than 20.

As mentioned, Raya is the first Southeast Asian Disney Princess. Her father is Chief Benja, chief of Heart, one of the five lands of Kumandra. In the film, he distinctly refers to Raya as a princess, makes her a guardian of the Dragon Gem, and indicates to her and to the audience that one day, she will be the leader of Heart. Just as Pocahontas, Mulan, and Moana are part of the Disney Princess lineup, so too is Raya — even though we don’t know her as “Princess Raya.”

What culture is Raya and the Last Dragon based on?

Raya is inspired by the cultures and countries of Southeast Asia. The filmmakers were influenced by the vultures of Vietnam, Cambodia, and Malaysia, for example. During a Q&A session, the filmmakers provided some insight into the inspiration behind the character of Raya.

When asked about inspirations from other Disney Princesses or characters in Southeast Asian folklore that inspired aspects of Raya as a character, here’s what the filmmakers had to say:

“I don’t think there were specific characters within Southeast Asian mythology. But in Southeast Asia, there’s a great tradition of female leaders, military leaders and warriors. And leaders of their realms. And also, the stories of Nagas and dragons, particularly with water.

In Malaysia, we have the warrior Tun Fatimah, and we have stories of Naga Tasik Chini, which is the dragon of Chini Lake. So it’s sort of within a lot of cultures in Southeast Asia. And so we knew it was one of those threads that would really resonate within the film.” – Adele Lim, screenwriter

“In Vietnamese culture, there’s this really famous story of the Trung sisters. They’re like these famous Vietnamese warriors that I definitely thought of. Without a doubt, I think Adele and I drew inspirations for families from our parents. Specifically for me, from my mom. I know what she had to go through when she came to this country. And just to have that kind of fighting spirit. And also, just the kind of energy that our people have that you don’t always get to display on screen. It was important for us to show the real spirit of Southeast Asia out there.” – Qui Nguyen, screenwriter

Cast of Raya and the Last Dragon

Raya, the titular protagonist and strong female warrior of the film, is voiced by Kelly Marie Tran, known for her role as Rose Tico in the Star Wars sequel trilogy films The Last Jedi and The Rise of Skywalker. Being that Raya is the first Southeast Asian Disney Princess, the filmmakers, Kelly herself, and audiences have noted the importance of having Tran, a Southeast Asian actress, voice Raya.

“It is so exciting to be the first Southeast Asian Disney Princess,” said Tran. “It is a big deal. It feels like a really big honor and a big responsibility at the same time, and I just want to do it justice. I’m really grateful and even now I am still sort of in a place of disbelief with the whole thing.”

Whose voice will you recognize in Raya and the Last Dragon?

There are so many amazing actors who provided the voices for the characters. Below, Disney has shared the official cast list, in addition to the directors, producers, and screenwriters, so you can get a feel for who stars in and who wrote Raya and the Last Dragon.

Many Disney fans want to know, Who is the most famous cast member in Raya and the Last Dragon? While there are so many well-known actors who star in this film, someone who we know viewers will love to see on screen as an animated character is Awkwafina. Awkwafina’s performance as Sisu was even compared to Robin Williams’s, whose character of the Genie is so iconic, hilarious, lovable, and becomes Aladdin’s best friend — just like how Sisu becomes Raya’s best friend. Read more about that here.

Main age group for Raya and the Last Dragon

Although this is a Disney movie, it does still beg the question, what age group is the target audience, and how do you know whether or not a child would be frightened by Raya and the Last Dragon? Not to worry — we have the answers for you.

Like many other Disney films (including Moana, also from Walt Disney Animation Studios), Raya and the Last Dragon is rated PG. This means it is appropriate for most audience, though parental guidance is suggested.

If you are wondering whether or not your child will be frightened by the content of Raya, we are here to assure you that the film is not scary in any way. Though martial arts is a key component of the film, the most frightening “character” in the movie is the Druun, a mythical force that has the ability to turn all life forms into stone. However, after watching the film ourselves, we can confirm that the evil force of the Druun is not scary — there are plenty of Disney Villains who are much scarier than the Druun! The concept of the Druun (as in, the idea of loved ones turning to stone) is much scarier than the actual visual representation of it.

Overall, this film is enjoyable for all ages. It has adorable and hilarious characters, beautiful imagery, and a theme (the importance of trust) that is relatable for everyone, no matter your stage of life.

Watch Disney’s Raya and the Last Dragon in theaters and on Disney+ Premier Access beginning March 5.