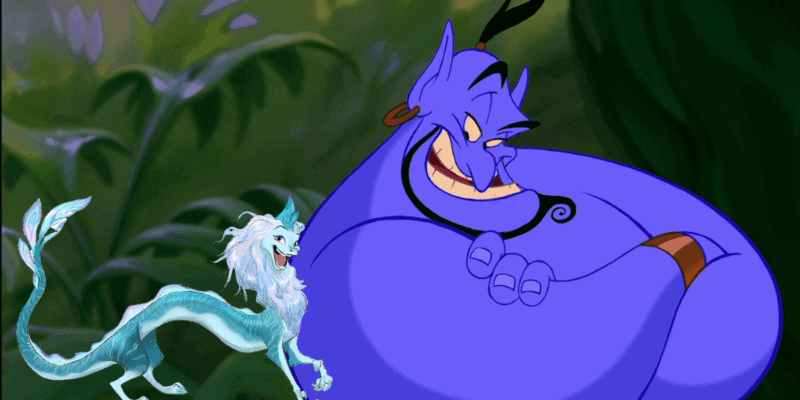 Disney has plenty of new animated and live-action films up their sleeve in 2021, but one that we certainly can’t wait to see is Raya and the Last Dragon.

First announced at D23 Expo in 2019 (though with a different lead actress, Cassie Steele), Raya and the Last Dragon stars Kelly Marie Tran and Awkwafina in the titular roles of Raya and Sisu (the last dragon), respectively.

During the virtual press day for Raya and the Last Dragon, the filmmakers shared how Sisu is comparable to the iconic Genie played by Robin Williams in the animated classic Aladdin. Based on the film footage we’ve seen, the comparison is definitely warranted — Awkwafina’s character is iconic, hilarious, original, and all-around lovable, not unlike Williams’s Genie.

Disney’s Raya producer Osnat Shurer shared, “When we met Awkwafina, we knew, first of all, that she’s an incredible actress with a wide range, and with a very professional and disciplined approach to acting. But Awkwafina fit the dragon that we were looking for—some combination of wisdom and emotion and humor. She brings all those three things together in some magical potion.”

Director Don Hall expanded on why the comparison of Awkwafina to Robin Williams is “not a bad one.”

“It’s hard to imagine another actor performing the role of the Genie in the original Aladdin. It was sort of tailor-made for Robin Williams’ specific gifts,” Hall said. “I feel like we did the same thing with Sisu. Sisu was written with Awkwafina in mind, and I can’t imagine somebody else as Sisu. Awkwafina is Sisu. Sisu is Awkwafina.”

Hall is right. Originally, when it was announced that Walt Disney Studios was releasing a new, live-action version of Aladdin with Will Smith as the Genie, it was hard for fans to accept anyone else playing the role. Just as it’s hard to imagine another actor playing Genie in Aladdin, it’s also hard to imagine someone else playing Sisu in the newest film from Walt Disney Animation Studios.

Sisu, short for Sisudatu, is the last dragon of Kumandra. Legends say she’s a divine water being of unspeakable beauty and unstoppable magic, but what Raya finds instead is a funny self deprecating dragon who sees herself as the perennial C-student. Now she must learn to become the dragon of legend if she is to save the world with Raya.

“I definitely connect with Sisu,” says Awkwafina. “She has optimism, she has hope and she even has belief in herself—but really to her surprise. I love her because she isn’t perfect, and I think that’s a strong message to send to everyone: We don’t have to be perfect.”

From what we can tell of the footage we have seen so far, Awkwafina absolutely shines as Sisu in Raya and the Last Dragon. It’s clear that this is one new Disney character that fans won’t soon forget.

Awkwafina is making her Disney debut very soon in Raya and the Last Dragon. She will also star as Scuttle in the live-action version of The Little Mermaid alongside Halle Bailey as Ariel, and she was also cast in the new Marvel Cinematic Universe film Shang-Chi and the Legend of the Ten Rings.

For more information on the newest animated feature film from Walt Disney Animation Studios, read the official synopsis below:

You can watch Awkwafina’s Sisu in action in the new Disney Raya trailer below:

Raya and the Last Dragon premieres in theaters and on Disney+ Premier Access on March 5, 2021. Read all about the film in our guide here.