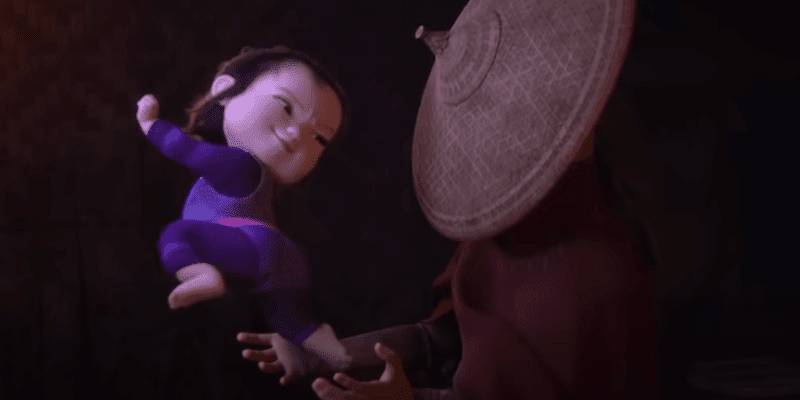 Yes, that’s right. The new Disney movie features a baby con artist. Her name is Little Noi, and she is so much more than she seems. Aside from being adorably cunning, she has a backstory that will tug at the heartstrings of even the most stoic Disney fans.

Related: How to Watch ‘Raya and the Last Dragon’

The thieving toddler Noi, played by Thalia Tran, is from the land of Talon, along with her band of Ongis, monkey-like creatures who assist her in trickery). Upon first glance, audiences may not fully understand why Disney decided to include a con baby in the film, but the filmmakers and cast shed light on why Noi is such an important part of the story.

Raya and the Last Dragon director Carlos Lopez Estrada said that he believes Little Noi represents a real struggle — not only in the world of Kumandra but also in the real world.

“On the surface, she’s a cute little baby that bosses around these fantasy monkeys, but if you get to understand her story, you’ll realize that it actually comes from a really human place.

She robs people because she’s an orphan. And she robs people because she doesn’t have a place to sleep or eat. And she hangs out with these monkeys because she doesn’t have anyone else. And I think that’s very reflective of the journey that we go on in this movie. You meet this group of people that, on the surface, appear to be tough or aggressive or violent, and then you get to meet them, and there’s a reason why those people are perceived a certain way, or people have had to adapt to be a certain way.

And not until this group of people of complete different backgrounds and ideologies are forced to be together and forced to coexist that they get to really understand each other and they get to see eye-to-eye and they get to sort of speak the same language, which is really what the movie’s about.”

Although the addition of a thieving baby is quite funny, the character symbolizes so much more than that: strength, independence, loss, and innocence.

During the virtual press conference for Raya and the Last Dragon, the young actress who plays Little Noi, Thalia Tran, shared why she believes her character is relatable and impactful.

“Playing Noi is definitely something — nothing like I’ve ever done before because she obviously doesn’t use English words, she speaks in her own language. But that connection she has with her gang of Ongis and even that she develops with Tong and Raya and Boun and the whole gang — that sense of comradery and that strength within, you know, that group of people and that sense of family — that is definitely something that I related to personally.

And I know growing up in a Vietnamese family, family always comes first. From the traditions to just everyday life, you know, family is such a huge part of it, especially now in quarantine with my family all the time! It’s just something that definitely clicked with me and I’m like, Yes, I know what it feels like.”

Tran also shared that the strength that Noi has to develop as a baby is something that is also present in Southeast Asian culture, which values independence:

“And for her to be so young and to have her family turned to stone by the Druun, and her to have to kind of raise herself with the Ongis, and that sense of strength that she has to develop — I think that’s something that’s also very common in Southeast Asian Families, especially because it’s something that is very valued, the sense of independence.

I think there’s just a lot about Noi that even though she can’t speak it into words, that people will connect with, hopefully, and I definitely connected with.”