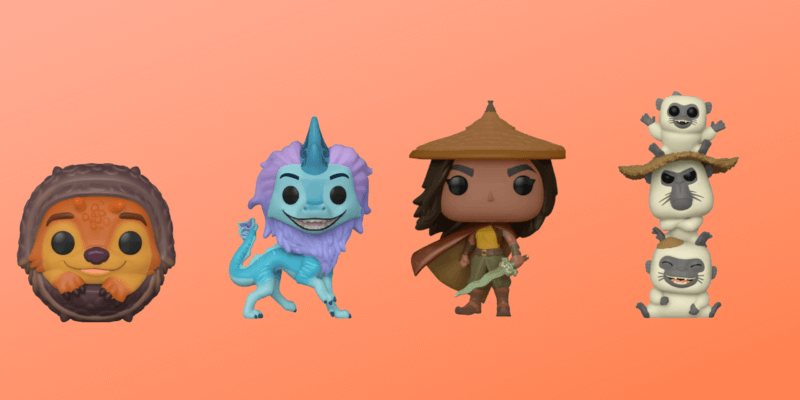 We are just a couple of months away from Raya and the Last Dragon — featuring Kelly Marie Tran voicing the main character, Disney’s first Southeast Asian Princess — simultaneously arriving in theaters and on Disney+, and it would seem that we’re finally starting to see some of the merchandise available for preorder. As with most Disney, Marvel, and Pixar movies, Funko is among the first to reveal their line of merchandise and we have to admit, the new Funko POPs to go alongside the movie look fantastic.

Let’s take a look at the Raya and the Last Dragon Funko POPs:

The leading lady looks awesome in Funko form and is set to be released later this month for $10.99. She’s carrying her sword which we’re sure will come into the story in a big way.

The little Pill Bug acts as Raya’s steed in the movie and also comes priced at $10.99. The figure looks like he’s the small version from the movie rather than the version that Raya ends up riding.

Sisu is one of the most important characters of the upcoming movie and is the last dragon mentioned in the title of the movie.

We don’t know a lot about this trio just yet but we’re pretty sure they are going to be onscreen for some comic relief. The figure comes priced at $10.99.

A slight variant on the original Raya Funko Pop, this is the heroine in her warrior form. The good news is that she’s the same price as $10.99.

We don’t know much about Namaari at all at this stage so it’s going to be exciting to find out more about the character when the movie releases in March!

All of the Raya and the Last Dragon Funko Pops are available to order now and will be released later in January!

If you’re a fan of Disney Funko Pops then check out some of our other recent favorites:

What do you think of the Raya and the Last Dragon Funko Pops? Let us know in the comments below!