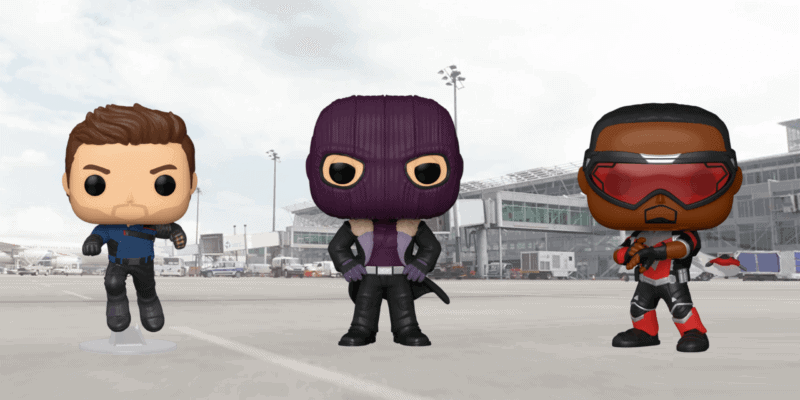 It seems that we’re about to get our first proper look at The Falcon and The Winter Soldier merchandise thanks to the awesome team at Funko. While these vinyl figures are yet to be officially announced by Disney, Marvel or even Funko, we’ve spotted some exciting new pre-orders pop up over on Entertainment Earth.

Don’t be worried about spoilers for the upcoming show, these figures are all based on looks that we’ve already seen.

This makes complete sense given that we know these are going to be the three core characters that the new Disney+ series will focus on. Let’s take a look at each of the new Funko Pop Marvel figures below:

The new Falcon figure features Sam Wilson as we’ve seen him before in his signature goggles and flight suit. The figure is priced at $10.99.

Bucky Barnes is seen here with his new Vibranum arm that we saw him get as part of the Avengers Infinity War/Endgame movies. He’s also priced at $10.99.

We last saw Baron Zemo at the end of Captain America: Civil War where he was almost responsible for destroying the Avengers through his plan to frame The Winter Soldier and resurface the awful things he was used for when his mind was corrupted.

We’ve already seen confirmation that Zemo is going to be the main antagonist of the upcoming show and we can’t wait to see more from the villain. Like the other new figures, he’s priced at $10.99.

The Falcon and The Winter Soldier is set to debut on Disney+ at some point in 2021 but it looks like all of these Marvel Funko Pops will be arriving in January.

Are you excited for the new show? Let us know in the comments below!