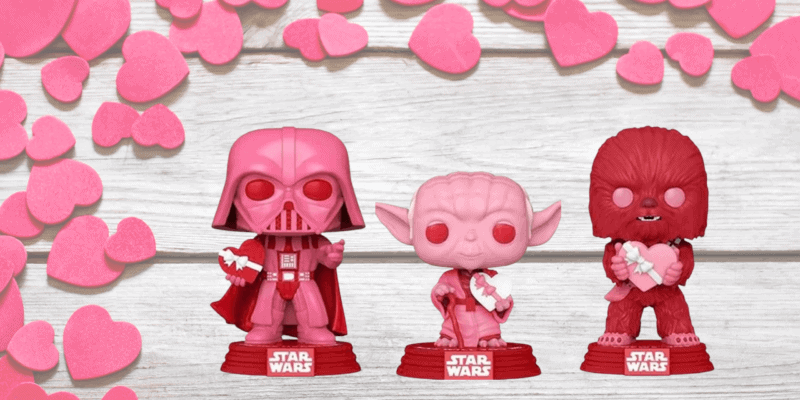 While it might seem a long way off, Valentine’s Day is just a few weeks away now and Star Wars and Funko are already gearing up for the day with a new series of Funko POPs. The new series of vinyl figures include cute new figures of Darth Vader, Yoda, Chewbacca and a Stormtrooper.

Darth Vader looks like he’s looking for a new love with a box of chocolate in hand and his suit painted bright pink. Not quite as menacing as we see him in the movies and shows.

The Darth Vader figure will be released later in January and is priced at $10.99. For more information click here.

Our little green friend has turned pink for the holiday and comes equipped with a white box of chocolates. Let’s hope he picked them up at a store and didn’t find them on Dagobah.

As with the Vader figure, Yoda is out later this month and comes priced at $10.99. For more information click here.

Related: The ORIGINAL Yoda Will Reportedly Appear in “The Mandalorian” in the Future

This pink Stormtrooper also comes equipped with a white box of chocolates (though this time with a red ribbon) and will be released alongside the other figures this month for $10.99. For more information click here.

Out of all the figures being released, this has to be our favorite, just look at his big pink eyes and toes! The figure comes out with the rest of the set at $10.99 later in the month. For more information click here.

The good news for Star Wars fans is that there are only four figures in this set. That means it isn’t an impossible task to collect the lot! You’re going to want to pre-order the collection soon as we have no doubt that these are going to fly off the shelf.

Will you be purchasing these Star Wars Valentine’s Day Funko Pops? Let us know in the comments below!