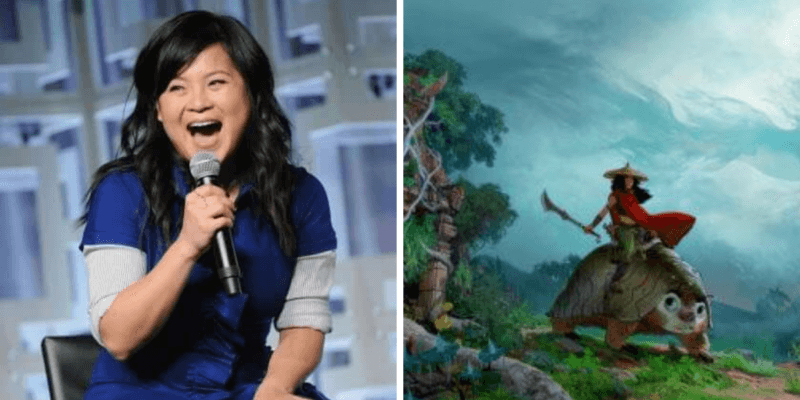 This news comes as Entertainment Weekly also shared an exclusive first look at the upcoming film:

Disney praised the film’s directors, Don Hall (Winnie the Pooh, Big Hero 6, and Moana) and Carlos López Estrada, as EW caught a glimpse of the studio’s overall excitement for the project.

“As filmmakers, Don and Carlos bring a combination of animation know-how and emotional storytelling to Raya and the Last Dragon, bringing our fantasy adventure to surprising, original, and dynamic heights,” Walt Disney Animation Studios’ Chief Creative Officer Jennifer Lee says in a statement to EW. “They both saw the potential for this film and had a strong vision for the story, especially for our lead character, played by the wonderfully talented Kelly Marie Tran. And no small feat, directors Don and Carlos, writers Qui and Adele, and the entire crew of 400 Disney Animation artists are making this film together, while separated and working from home.”

Originally intended to be played by Cassandra Steele, it will be Tran who now brings Disney’s latest heroine Raya to life. She will be playing alongside Awkwafina who was already announced to be playing Sisu, a dragon stuck in human form and needs Raya’s help to regain her powers and become a dragon once again.

Raya and the Last Dragon is the first Disney animated film to be inspired by Southeast Asia, and Tran will be the first Southeast Asian actress to lead any Disney film. She also played Rose Tico starred alongside John Boyega, Daisy Ridley, and Mark Hamill in Star Wars: The Last Jedi, and Star Wars: The Rise of Skywalker.

“She is someone who is technically a princess but I think that what’s really cool about this project, about this character, specifically is that everyone’s trying to flip the narrative on what it means to be a princess,” Tran says. “Raya is totally a warrior. When she was a kid, she was excited to get her sword. And she grows up to be a really badass, gritty warrior and can really take care of herself.”

“I’m never going to forget it,” López Estrada tells EW about his decision to choose Tran. “I think [Don and I] rode in the car together, and we were quiet, looking at each other and nodding our heads just being like, ‘Yep, yep, yep. Kelly’s perfect.’”

Put simply, Hall says “she is Raya — just her buoyancy and her positivity, but yet there’s a strength as well to Kelly and the character.”

Disney describes the story of its latest animated feature as the following:

Disney’s Raya and the Last Dragon is scheduled to be released in theaters March 12, 2021. It was delayed along with several upcoming movies including Pixar’s Soul and Disney’s Mulan and Jungle Cruise.