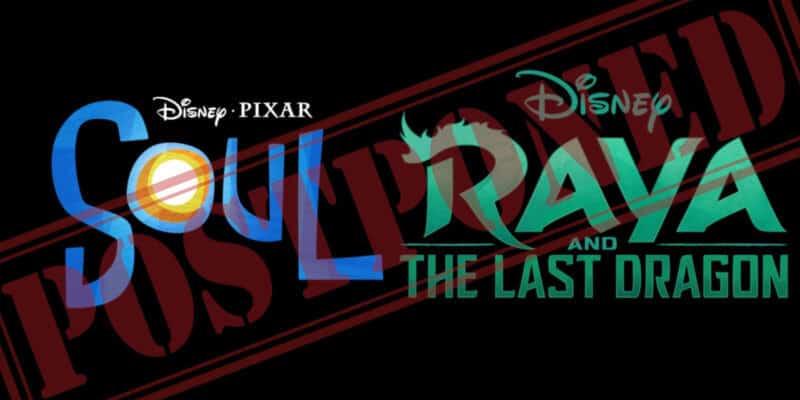 On Monday morning Disney announced two of its upcoming animated films, Pixar’s Soul and Disney Animation’s Raya and the Last Dragon will both see postponed release dates amid the current pandemic–which has not only closed theaters everywhere, but also caused the furlough of countless Walt Disney Studios employees.

Soul and Raya and the Last Dragon were announced last year at D23 Expo 2019- – both of which, featuring star-studded casts who graced the D23 stage in celebration of the upcoming films.

Soul was originally set for release in June. However, given the current climate in the film industry and the closures of movie theaters everywhere, the film has now been pushed back for release on November 20.

Raya and the Last Dragon, which was originally set for release on Thanksgiving weekend has now been pushed back to next year on March 12, 2021.

These two film’s postponements are only two of several films the Walt Disney Company has had to push back in the wake of COVID-19, which has caused federal orders of social-distancing and stay-at-home mandates throughout the country.

As we previously shared, Disney’s upcoming film slate has been pushed backward in the wake of the recent pandemic. New dates have been assigned to the majority of the MCU’s upcoming films, including Marvel’s Black Widow, The Eternals, Shang-Chi and the Legend of the Ten Rings, Doctor Strange in the Multiverse of Madness, and Thor: Love And Thunder. Additionally, Disney’s live action Mulan release date has also been pushed backward as well.

More Information on Soul and Raya and the Last Dragon

For those not familiar, Soul follows Joe, a middle-school band teacher whose life hasn’t quite gone the way he expected. His true passion is jazz — and he’s good. But when he travels to another realm to help someone find their passion, he soon discovers what it means to have soul.

Raya and the Last Dragon tells the story of Raya, a hero and lone warrior on a quest to save her world, determined to find the last dragon who she believes has the power to save Kumandra.

What are your thoughts on Disney having to post pone its major films in the wake of the current pandemic? Let us know in the comments below!