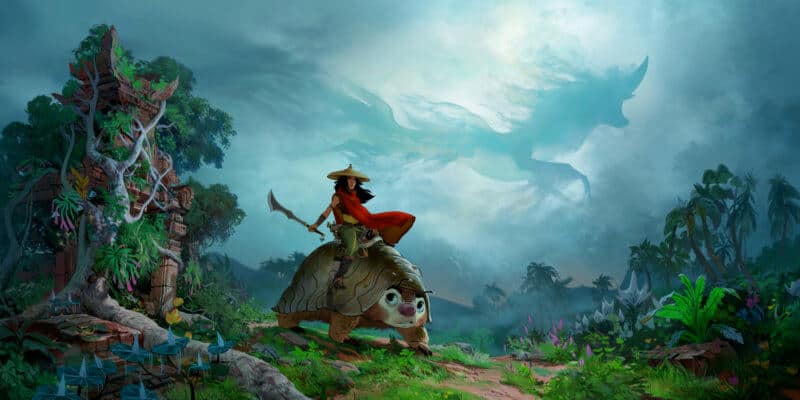 Related: Disney Focuses on Representation with ‘Ray and the Last Dragon’

Amid the pandemic, it was announced that the upcoming animated Disney film would be pushed back to March 12, 2021.

Until now, very few details about the Disney fantasy tale had been released. Fans had seen the logo for the movie and one piece of concept art, featuring an indistinguishable girl (Raya the lone warrior) riding a creature through Lumandra, her native land.

In the image above, we can see Raya wears her culture’s traditional dress and carries a staff of some sort that will presumably play a role in the Disney movie. Disney fans can also see hints about Raya’s quest to find the last dragon, as the dragon is seen in the clouds behind her. The blue flames (or perhaps illuminated blue plants?) we can see along the path in the foreground don’t look too dissimilar from Merida’s wisps in Pixar’s Brave!

The official synopsis of the Disney animated feature reads:

Raya will be an epic fantasy adventure with southeast Asian themes, set in a realm called Lumandra, described as “a reimagined earth inhabited by an ancient civilization”. Five clans form the land of the dragon, and Raya is determined to find the last dragon.

Presently, only two voice actresses have been cast in the movie. Raya was initially to be voiced by Cassie Steele but as we reported in August that role now falls to Kelly Marie Tran, who we all know as Rose Tico in Star Wars. Raya and the Last Dragon is inspired by Southeast Asia, and fittingly Tran will be the first Southeast Asian actress to lead any Disney film. Sisu, the dragon, will be played by comedian Awkwafina, who is known for her role in Crazy Rich Asians.

Awkwafina will also be voicing Scuttle in the live action version of The Little Mermaid.

Are you looking forward to seeing Raya and the Last Dragon? What is your all-time favorite animated Pixar or Disney studio movie?