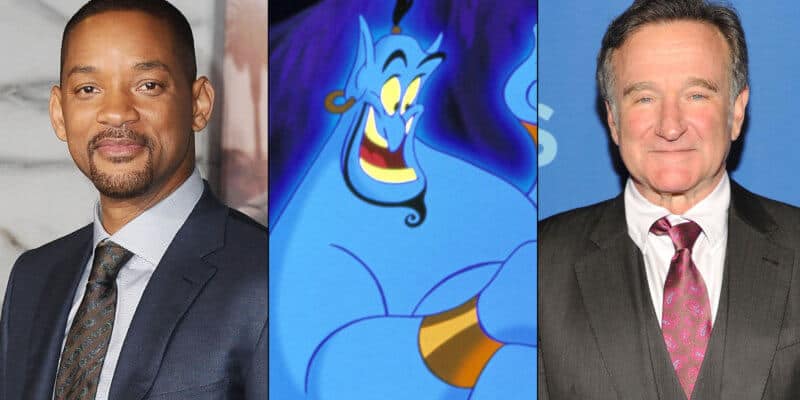 Yesterday, fans of Disney’s upcoming live-action “Aladdin” saw the film’s first full-length trailer, which featured an in-depth look at all of the film’s new characters, including the Genie. In tribute to the original Genie, Will Smith took to his personal Instagram account to post a moving tribute to Robin Williams.

In the image shared by Will Smith, we see an animated version of Smith’s portrayal of Genie in the new live-action film coming to theaters later this year. By his side, we see the original Genie voiced by Robin Williams in the classic animated version of the film from 1992, with each pointing happily at one another. In the caption, Smith wrote “I know Genies don’t have feet… But you left some big shoes to fill. R.I.P., Robin!”

The image was created by character designer for Disney TV, Hasbro, and other kid-friendly companies and brands, Luigi Lucarelli, who Smith tags in his post.

I know Genies don’t have Feet… But you left some Big Shoes to fill. ? R.I.P., Robin!  And Thank You, @helloluigi Love the art work!

Since the last teaser trailer was released of the film showing Smith in a big CGI version of the beloved Disney character, fans have had mixed reviews. Some fans have completely written off the new character altogether.

Since production of the film began, many fans wondered how the film was going to portray Smith as Genie in the role originally made famous by Robin Williams, who as Will said, left some big shoes to fill.

For those who missed the full-length trailer that dropped yesterday, click here. In it, we see new never-before-seen scenes, including the moment Aladdin first lays eyes on Princess Jasmine.

Other never-before-seen scenes featured in this new trailer include the Genie in more forms than just his big and blue state. The trailer also gives fans a preview of the music to come from the film, including the classic “Friend Like Me” and “A Whole New World” songs re-recorded.

Disney’s live-action “Aladdin” is set to hit theaters on May 24.

Are you excited to see the upcoming live-action remake of Disney’s Aladdin when it comes to theaters later this year? Let us know in the comments below!