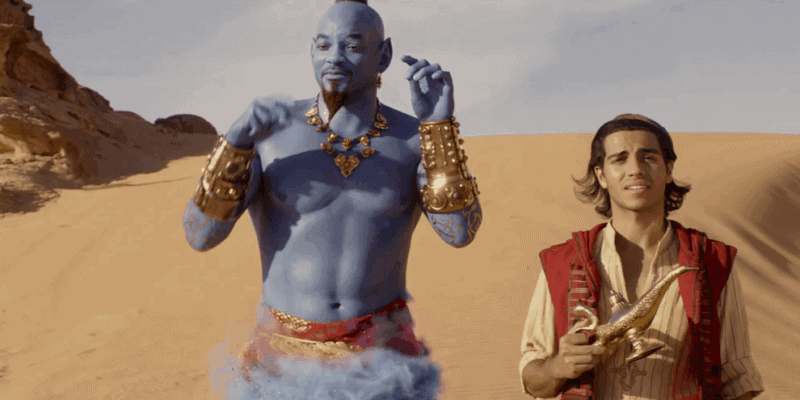 Today just got a little more magical as Disney has just released the first full-length trailer for the company’s live-action adaption of “Aladdin,” and judging by this preview, the film looks like a wild ride — possibly on a magic carpet?

In this new trailer, we get our first in-depth look at the film, including its main cast starring Will Smith, Mena Massoud and Naomi Scott in character as Genie, Aladdin and Princess Jasmine. Take a look at the full trailer below.

This new film re-tells the thrilling and vibrant story of the animated classic, following the charming street rat Aladdin, the courageous and self-determined Princess Jasmine and the Genie.

This new trailer begins in a wild chase, following Aladdin, who got caught in his thievery and is attempting to get away as guards quickly approach from behind. This is also where we see Princess Jasmine, who locks eyes with Aladdin for the first time following the chase.

Other never-before-seen scenes featured in this new trailer include the Genie, in more forms than just his big and blue state. The trailer also gives fans a preview of the music to come from the film, including the classic “Friend Like Me” and “A Whole New World,” songs re-recorded.

This live-action “Aladdin” film was brought to life by director Guy Ritchie, who assisted writer John August in penning the script based on the original animated film.

In addition to the release of this new trailer, the film also saw the premiere of a new poster. The poster features all of the film’s main stars and all of the riches and wishes that can be granted from the power of the magical lamp and Genie.

Are you excited to see Disney’s live-action “Aladdin” remake when it hits theaters May 24? Let us know in the comments below!