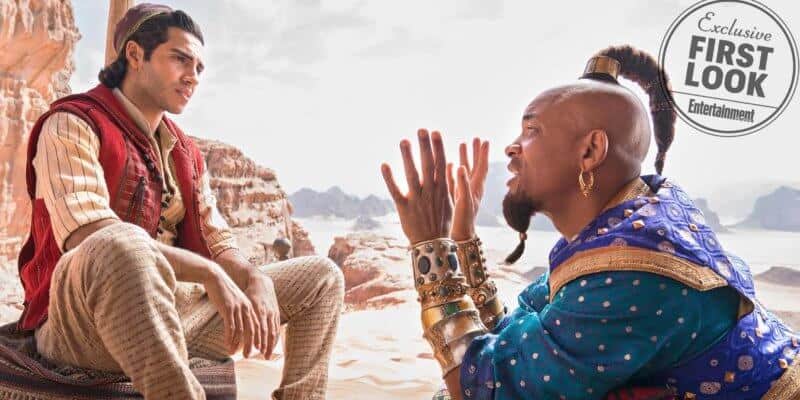 Entertainment Weekly has given Disney fans an exclusive first look at Guy Ritchie’s live-action remake of Disney’s animated classic “Aladdin.” This first look includes a preview of the film’s famous Genie Will Smith, a look at the new love story being told by Mena Massoud and Naomi Scott, and some inside details of the film’s massive set size of almost two football fields.

Guy Ritchie, most known for thriller films featuring action, robberies, car chases, and explosions, has taken a step in a different direction with this live-action remake. Although, according to EW, Ritchie’s diverse background inspired him to take on the challenge of directing the film when Disney first approached him for the job in 2016. “My skills and experience could add enough to make it feel fresh and worth it, but not so much that it would wash away nostalgia,” Ritchie told EW. He also added that because he has five children, “making a kids’ film was very appealing.”

“Aladdin” was the top box office hit in 1992 and was on the heels of hitting the box office sales of 1989’s “The Little Mermaid” and 1991’s “Beauty and the Beast.” With its success and the success of these other beloved films, this animated hit helped carve a solid spot for Disney in the animation game. 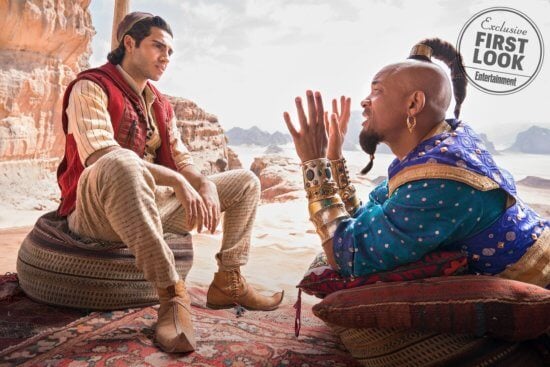 To re-create this beloved story, Ritchie had to start with finding what is arguably the center of the story: The Genie. Robin Williams initially played this famous role, but his untimely passing in 2014 created another challenge for Ritchie, reimagining Genie in a whole new way.

“The great thing about the role of the Genie is that it’s essentially a hyperbole for who that individual actor is, so it’s a wonderful platform and tapestry for an actor to fill his boots on,” Ritchie told EW. So in stepped one of the most hilarious people in entertainment: Will Smith.

“Whenever you’re doing things that are iconic, it’s always terrifying,” Smith told EW. “The question is always: Where was there meat left on the bone? Robin didn’t leave a lot of meat on the bone with the character.”

Smith went on to tell EW that when creating the character on screen, “I started to feel confident that I could deliver something that was an homage to Robin Williams but was musically different,” he says. “Just the flavor of the character would be different enough and unique enough that it would be in a different lane, versus trying to compete.”

The final version of Will Smith’s Genie in his blue lamp isn’t finished, but Ritchie told EW when discussing the reimagining of the famous character, “I wanted a muscular 1970s dad…He was big enough to feel like a force — not so muscular that he looked like he was counting his calories, but formidable enough to look like you knew when he was in the room.” 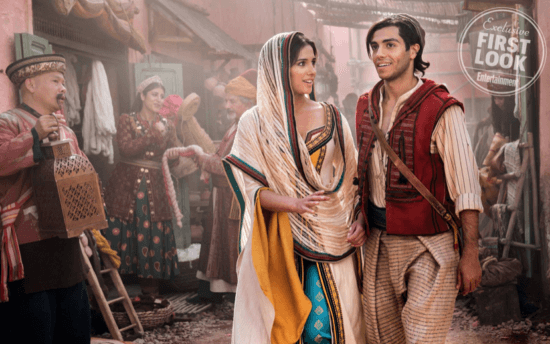 Another challenge Ritchie faced when recreating this beloved animated tale was finding two leads to tell the famous love story of Jasmine and Aladdin. Ritchie told EW that the search was long and included hundreds of auditions over six months. Eventually, the roles went to 27-year-old Canadian actor Mena Massoud, most known for his role in Amazon Prime Video’s “Jack Ryan series,” and British actress Naomi Scott, 25, known for “Power Rangers.”

EW reports that for the role of Aladdin, Massoud had to jet off to England to learn to sing correctly and dance, as well as perform stunts for the film. Some of the stunts for the film included riding a camel and scuba diving. Massoud told EW, “The singing and dancing I had to train and put in time for, as I’m predominantly an actor first,” Massoud says. Ritchie calls him “quite a funny lad” and said the actor quickly bonded with Smith off-screen, capturing the brotherly back-and-forth that Aladdin and Genie share. “What was nice about Will was that the more I got to know him and the more I spent time with him, the stronger naturally our relationships became with our characters,” said Massoud

Scott, who portrays the film’s famous princess Jasmine, told EW that she was excited to put her twist on a Disney princess: “Jasmine’s main objective at the beginning is to really protect her people and to do right by them. She isn’t a finished article at the beginning of the movie, but she has this beautiful arc and progression, and she goes from asking for what she wants just to take it and displaying that she is a leader.”

In this new film, Scott’s Jasmine takes from the original Jasmine’s character in the animated film and builds on it. Ritchie says that the film has been reworked to reflect more present-day ideals that make her “a more rounded character and maybe not being such a stereotype of the time,” Ritchie says. Additionally, this new Jasmine also received her solo song in the film, one of the new numbers that composer Alan Menken has written (with lyrics from La La Land songwriters Benj Pasek and Justin Paul).

This new film also gives Jasmine a female counterpart to bounce ideas and dreams off of, a newly created role of Dalia (played by Saturday Night Live alum Nasim Pedrad). 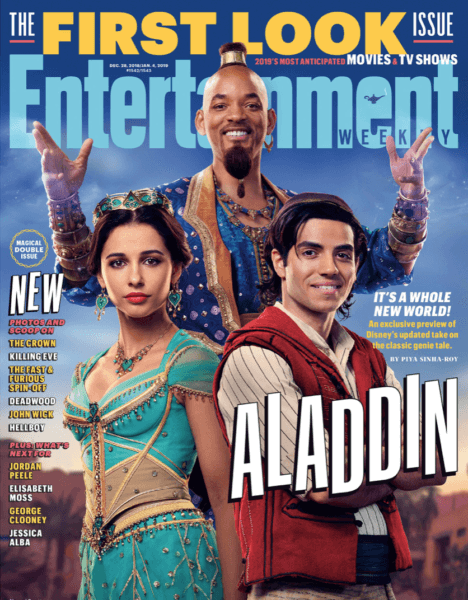 One final challenge Ritchie had to tackle with this new film was where it would be shot and how they were going to create the stunning kingdom seen in the original animated film.

According to EW, an original consideration was Morocco. Although, this was scrapped when they realized it might hinder them to try to create the fictional Agrabah. “I think I was freer to pull things from where I wanted them. I didn’t just have to be Moroccan,” production designer Gemma Jackson tells EW. Instead, Jackson and her team chose to build a set in southeast England that totaled in size to be as large as the size of two football fields.

Jackson told EW that she drew inspiration from Moroccan, Persian, and Turkish cultures, Victorian paintings, and Iznik ceramics when designing the set. Ritchie was also assisted by “an army of cultural advisers” on set. This set served as the creative setting where Ritchie filmed musical numbers, parades, and fast, choppy scenes of Aladdin being pursued by the Sultan’s guards.

EW reports that both Disney and Ritchie also faced the hurdle of updating “Aladdin” and its cast while avoiding cultural inaccuracies and insensitivities that the 1992 animated film fell into, such as depicting the street-market sellers of Agrabah as greedy and grotesque or describing Arabia as a place “where they cut off your ear if they don’t like your face.”

Massoud says the film’s ensemble does represent the diversity of the Middle Eastern and South Asian worlds, pointing out that he’s Egyptian-Canadian; Scott is Caucasian-Indian; Pedrad is Iranian-American; and actor Marwan Kenzari, who plays Jafar (the villainous Grand Vizier to the Sultan, who seeks the lamp for his nefarious gain), is Dutch and of Tunisian descent. “We’ve covered almost every continent, which is rare these days, but I’m proud to be in a film that represents so many visible and ethnically different cultures,” says Massoud.

What are your thoughts on these new details released about the live-action remake of “Aladdin?” Let us know in the comments below!