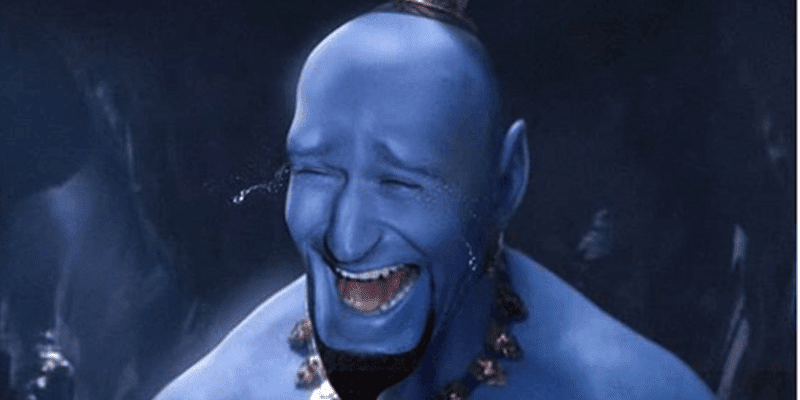 Applause, anyone? Disney’s most recent trailer for the upcoming live-action remake of “Aladdin” was met with mixed reviews with the reveal of Will Smith as Genie. To remedy fans’ disappointment in Genie’s new look, one fan took to social media and shared their version of Genie…with Robin Williams’s face instead of Smith’s.

Artist and Instagram user Bosslogic recently shared his rendition of a life-action Genie by swapping the face of Will Smith with Robin Williams. He posted his work with the caption, “Still missing the OG,” referring to Williams as the original voice of Genie in the 1992 animated “Aladdin” film. Many fans commented on the post, sharing similar sentiments of sorrow and reminiscing about Williams’s portrayal of the character.

Take a look at Bosslogic’s artwork below:

Williams sadly passed away in 2014, and numerous fans have made it clear that they are unsure and even highly critical of Smith’s portrayal of Genie, who was one of Williams’s iconic and recognizable characters. As Screenrant points out, if Williams were still around today, it is unknown whether Disney would have found a spot for him in the new live-action “Aladdin” film, or even if Williams would have reprised his role as Genie instead of Smith. Still, although Bosslogic’s artwork provides an interesting contrast to Smith’s Genie, it may also bring back feelings of sadness and loss for fans of Williams.

Many fans have expressed their distaste for Smith as Genie, as seen in the latest trailer for the film, so Smith has some big shoes to fill and millions of fans to impress. And Smith knows it. The actor shared with Entertainment Weekly late last year that he had to work to create a character that honors Williams but is still unique:

“Whenever you’re doing things that are iconic, it’s always terrifying,” Smith told EW. “The question is always: Where was there meat left on the bone? Robin didn’t leave a lot of meat on the bone with the character.”

Smith went on to tell EW that when creating the character on screen, “I started to feel confident that I could deliver something that was an homage to Robin Williams but was musically different,” he says. “Just the flavor of the character would be different enough and unique enough that it would be in a different lane, versus trying to compete.”

The final version of Will Smith’s Genie in his blue lamp isn’t finished, but when discussing the reimagining of the famous character, Ritchie told EW “I wanted a muscular 1970s dad…He was big enough to feel like a force — not so muscular that he looked like he was counting his calories, but formidable enough to look like you knew when he was in the room.”

At the time of this interview, the CGI for Genie was not yet finished, and by the looks of the latest trailer and fans’ reactions, we still hope there is a lot more work to be done on the character. Although director Guy Ritchie shared that the live-action Genie has more of a “muscular 1970s dad” body than the larger-than-life physique of the animated version, we’re not so sure if his vision for the character will translate well enough on screen. We’re all for re-imagining stories and characters to keep film remakes unique, but there are some things so precious that they aren’t worth changing.

We’re going to have to wait until the film hits theaters this May to find out how Smith will take on Genie, but one thing’s for sure: it’s going to take a lot more than a 1970s dad to wow fans.

What do you think of Bosslogic’s rendition of Williams as Genie? Let us know in the comments!