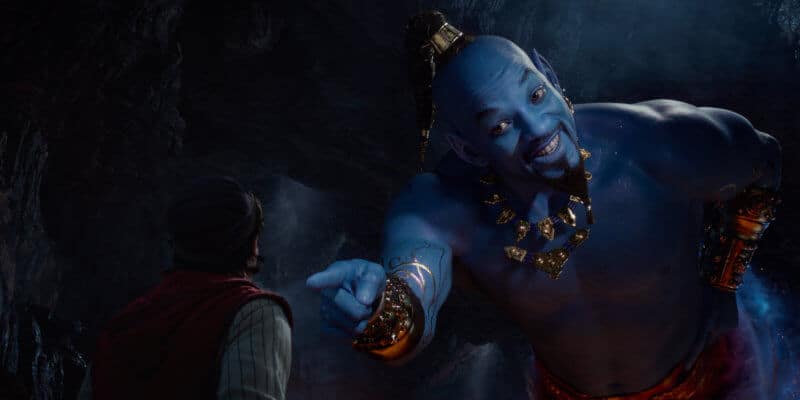 Our wish has finally been granted! Disney revealed what Will Smith will look like as the Genie in the all-new live-action “Aladdin” coming to theaters this summer.

In a trailer released on a commercial break during last night’s Grammys, the 1-minute clip includes never-before-seen footage of Will Smith in his role as the larger-than-life Genie, first portrayed by Robin Williams in the 1992 animated version of the film.

The clip of Smith’s portrayal of the Genie in the trailer is quite quick, as he’s only on screen in character for about 4 seconds. However, Smith’s lively and bright performance steals the spotlight. “You really don’t know who I am? Genie, wishes, lamp. None of that ringing a bell?” says Smith in character as Genie.

The trailer also includes more never-before-seen footage of the Sultan’s palace, a lively and colorful parade moving down a street in Agrabah, a small clip of Jafar and Iago, Princess Jasmine (played by Naomi Scott) making a royal entrance, and the iconic scene of Aladdin (played by Mena Massoud) rubbing the Genie’s lamp, which summons Will Smith’s small cameo in the trailer.

We first got a glimpse at the new film in October of last year, when Disney released the first teaser trailer. In the teaser, we got our first look at Massoud as Aladdin in the famous scene when Aladdin enters the Cave of Wonders, which is also when fans got their first look at Genie’s lamp from the new film.

What are your thoughts on Will Smith’s new look as the Genie? Let us know in the comments below!