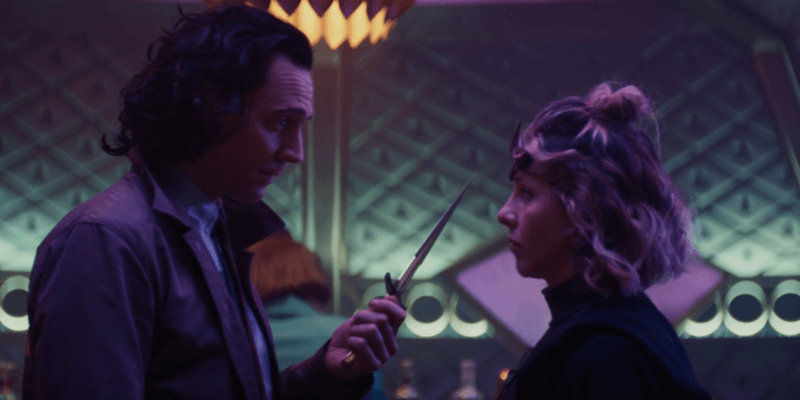 Loki Episode 3 “Lamentis” gave fans many great moments between Tom Hiddleston’s Loki and the Loki variant Sylvie (Sophia Di Martino). This included the God of Mischief’s clumsy metaphor for love, one that Loki star Tom Hiddleston tried to explain in a recent interview.

Episode 3 felt more like Star Wars than any other episode of the Disney+ original series so far, going full science fiction. And it made waves through the Marvel Cinematic Universe and the MCU fandom by confirming that the God of Mischief is canonically bisexual.

The Loki series also revealed that all the agents of the Time Variance Authority, or TVA, are actually variants who have been brainwashed by the Timekeepers. But fans have been focusing a lot on the Prince of Asgard’s interpretation of love, in particular.

The metaphor in question comes when the trickster god gets drunk on the train while Sylvie sleeps after a deep conversation. When she wakes up, the mercurial villain excitedly tells her that he knows what love is:

“Love is a dagger. It’s a weapon to be wielded far away or up close. You can see yourself in it. It’s beautiful until it makes you bleed. But ultimately, when you reach for it….[it isn’t really there]”

The metaphor stands in contrast to a similar line from WandaVision when Vision (Paul Bettany) tells Wanda Maximoff AKA Scarlet Witch (Elizabeth Olsen), “What is grief but love preserving?” It’s quickly being revealed that one of the major themes of Loki will be love, just as grief was for WandaVision.

Tom Hiddleston recently sat down with Marvel.com to share his opinion on the “Love Dagger” metaphor saying:

“It’s one of those things that Loki comes up with spontaneously. They were having a talk about love and trusting other people, and not being able to either love or trust for whatever reason, and Loki thinks he’s come up with something profound.”

It goes to serve the fact the trickster has spent eons pushing people away and has no idea what love is. He thinks love is painful because he felt betrayed by his father Odin (Anthony Hopkins) betraying him by never telling him he was really a Giant.

Loki head writer Michael Waldron also chimed in on the “Love Dagger”. He admitted to Marvel that the line was a bit rushed during the writing process:

“I wrote that really, really quick. I remember I was revising Episode 3 in the two weeks leading up to my wedding. It’s interesting because that’s probably the most romantic episode. At that point, Loki is a little bit drunk. That freed me up, where it was just like, ‘Don’t think too hard about it,’ which is sort of my first thought that Loki would think here.”

Honestly, it makes perfect sense that the God of Mischief does not have a firm grasp of what love is. In the MCU, Loki has not had any experience with love. His story arc from his debut in Thor (2011) to his death at the hands of Thanos (Josh Brolin) in Avengers: Infinity War (2018) is all about him feeling alone.

Loki had to overcome the hurt he felt at learning his birth father, the Frost Giant Laufey (Colm Feore), never loved him. This came after he learned that Odin (Anthony Hopkins) and Freya (Rene Russo) were not actually his parents.

Love may be in store for Loki

While the God of Mischief does not have much experience in love so far, Michael Waldron compared the relationship between Owen Wilson’s character Agent Mobius M. Mobius and Loki in the new series to a love story in an interview with Vanity Fair. He said:

“Mobius and Loki, that’s one of the love stories you might see in Loki for sure. Although if you print that, knowing our fans, they’re going to take it the wrong way.”

He went on to clarify it will be a platonic love story, but that hasn’t stopped fans from shipping the two characters. Outside his brother Thor (Chris Hemsworth) Loki has no close relationships in the Marvel Cinematic Universe, though that could change by the time he shows up again in Doctor Strange in the Multiverse of Madness (March 21, 2022).

The titular character shared deep and meaningful moments with the Lady Loki variant, who goes by Sylvie in the latest episode. Waldron called it “probably the most romantic episode” of Marvel’s Loki series.

This is followed up in Episode 4 when Mobius confronts the God of Mischief for “liking” the Goddess of Mischief. They share a tender moment after learning that the Timekeepers are actually robots possibly built by the Marvel comic villain Kang the conqueror. And just when they are about to share what may be the cringiest kiss in the history of Marvel, Loki is pruned.

Disney has been focusing on love stories beyond the princess/prince dynamic with stories like Frozen (2013) which explored sisterly love. Fans enjoy shipping the mercurial villain Loki with characters like Mobius or Sylvie – as they have with Falcon and the Winter Soldier character Sam Wilson aka Captain America (Anthony Mackie) and Sebastian Stan.

But Loki seems to be taking on a love story about learning to love yourself.

This trickster god may be the version of Loki who escaped using an infinity stone in Avengers: Endgame (2019), and not the one who was redeemed in Thor: Ragnarok (2018). But if he is sticking around for more seasons of the new series then Marvel will have to find a new way to redeem him.

It’s time for the trickster to learn not only to love others but also himself. In the fifth episode “Journey into Mystery” Loki meets even more variants of himself like Classic Loki (Richard E. Grant), Boastful Loki (Deobia Oparei), Kid Loki (Jack Veal), President Loki (Tom Hiddleston), and Alligator Loki.

Each variant teaches Loki something new about himself. Boastful Loki and President Loki show Loki his worst sides. Classic Loki in particular shows him that he is more powerful than he believes and reveals that he did love Thor as a brother. Classic Loki even sacrifices himself to give Loki and Sylvie a chance to get past Alioth.

In the finale episode of Loki, he shares a kiss with Sylvie as he finally learns to love himself more than his glorious purpose of seeking the throne. He wants to protect Sylvie and everyone else he met in season 1 of Loki. Loki believed that Sylvie was the best version of himself and he wanted to protect her at all costs.

Let us know what love stories you want to see in Loki, which is streaming new episodes every Wednesday on Disney+.