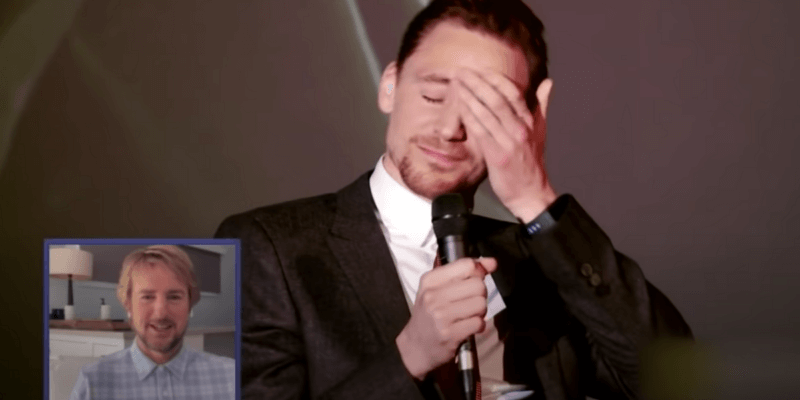 Owen Wilson watched a video of his Loki co-star, Tom Hiddleston, doing a killer impression of him and had the most Owen Wilson reaction ever.

Related: Who Is Agent Mobius M. Mobius In ‘Loki‘?

Owen Wilson is objectively an extremely likable celebrity. His laid back attitude and gentle optimism shine through every character he portrays. Maybe that’s why his highly recognizable voice is such a prime target for affectionate impressions — even from Loki star Tom Hiddleston.

Owen Wilson was introduced by host Jimmy Kimmel as “…taking a temporary leave from the Wes Anderson Cinematic Universe to be part of the Marvel one,” referencing Wilson’s frequent collaborations with the comedy director. Promoting his current Disney+ Marvel Cinematic Universe series Loki on Jimmy Kimmel Live this week, the Agent Mobius actor got a chance to see Tom Hiddleston’s best Owen Wilson impression and share his reaction in real-time.

Ever the affable personality, of course, Owen Wilson smilingly gave a generous assessment of Tom Hiddleston’s impression, offering generally high marks for the effort, describing it by saying, “That’s pretty strong. I think that was pretty good. I also felt the sort of word choice was good… that last line.”

You can watch the reaction posted to Jimmy Kimmel Live‘s Twitter here:

While Tom Hiddleston’s performance did not yield Owen Wilson’s trademark “Wow,” the actor seemed to be amused by the spectacle. The video of Tom Hiddleston’s impression predates the actors’ teaming on Loki. While promoting Marvel Studios’ Thor: The Dark World in 2013, Hiddleston was asked by a panel moderator to deliver one of Loki’s trademark dramatic speeches as Owen Wilson. Hiddleston obliged with gusto and impressive accuracy.

Owen Wilson worked closely with Tom Hiddleston in bringing the latest hit Disney+ MCU series Loki to life. Owen Wilson plays Agent Mobius of the Sacred Timeline watchdog group known as the Time Variance Authority (TVA). Though prior to his Agent Mobius character’s dedicated preservation of the timeline restored in Avengers: Endgame (2018), Wilson admits he wasn’t very familiar with the details of the Marvel Cinematic Universe.

Owen Wilson explained that while filming Loki in Atlanta, Tom Hiddleston would actually go over some of the finer points of where Loki fits into the MCU. Wilson referred to this crash course on the god of mischief — that lasted over the course of several days and included visual aides and video clips — as the “Loki Lectures.” When host Jimmy Kimmel quipped that it all sounded like a community college course on Loki, Wilson agreed, saying,

“That’s kind of what it was like. I think if I had had teachers like Tom [Hiddleston], I would’ve done better in school because he was very understanding. I mean he could tell when I was fading. You know, it would get to be late afternoon, and he’d say, ‘Owen, maybe we pick it up here tomorrow.'”

The “Loki Lectures” seem to have paid off, with the complex narrative of the Marvel Studios series off and running to a great start. You can catch new episodes of Loki every Wednesday streaming on Disney+.

Did Tom Hiddleston nail that Owen Wilson Impression? Let us know what you think in the comments?