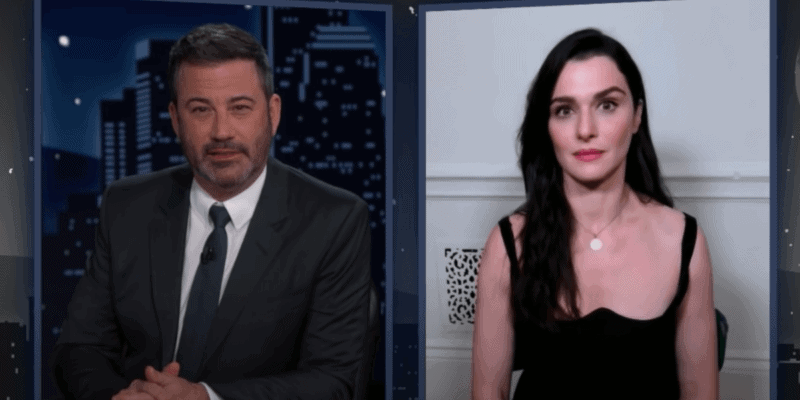 Jimmy Kimmel unknowingly revealed the secret plot detail as he introduced Rachel Weisz, staggering the Oscar-nominated actress before she even appeared on-screen. While Weisz was there to promote her role in Marvel’s hotly-anticipated feature film Black Widow, Marvel fans had not been aware of her character’s full name — until now. Based on Weisz’s dumbfounded reaction to Kimmel’s gaffe, that particular point may wind up being a major revelation.

Weisz appeared on Jimmy Kimmel Live via Zoom, where the host introduced her as portraying Melina Vostokoff in Black Widow. Appearing taken aback by her accidentally revealing intro, Weisz said,

Jimmy Kimmel appeared to be every bit as surprised as Weisz, asking if the information he just read off his teleprompter was truly spoiling classified Marvel Studios intel. Weisz, a bit frazzled, replied, “I believe so.”

According to Weisz, Marvel boss Kevin Feige and Marvel Studios provided her a list of no-nos for public discussion regarding Black Widow and the Marvel Cinematic Universe — a list that she misplaced. The actress admitted,

“The one thing I do remember is — I know the big spoilers which I’m obviously not going to say. My character’s second name is like…”

Weisz then mimed zipping her lips. She also pretended to take a stiff drink to right her nerves as she took a swig from her water glass.

Ever the consummate host, Jimmy Kimmel was able to smooth over the cringe moment by appearing to trump his spoiler slip-up with the hilariously fabricated leak that Kimmel is, in fact, going to be playing Kraven the Hunter in the upcoming Marvel and Sony Pictures film. Marvel fans know that Kimmel was commenting on the recently announced Kraven the Hunter casting of Aaron Taylor-Johnson in the titular role — a role several Hollywood A-listers were considered for.

As presented in the Black Widow trailer, most notably during a “family dinner” scene Weisz’s character appears to share something of a familial history with Natasha Romanoff (Scarlett Johansson.) In the pages of Marvel Comics, Melina Vostokoff is, like Natasha, associated with the Red Room — Russia’s brutal assassin training program. Vostokoff develops jealousy of Romanoff that results in a bitter rivalry. Melina becomes a nemesis of Black Widow as Iron Maiden.

While she may not actually become the Iron Maiden of Marvel Comics in the Black Widow film, the reveal of her last name does keep her in contention for a heel turn, and possibly the secret identity of Taskmaster — the film’s mysterious big bad.

Marvel fans have been on the lookout for any plot details they can get from the mysterious Black Widow production, helmed by director Cate Shortland. David Harbour has been attempting to oblige fans, releasing spoiler-y content on his Instagram page last month.

Marvel fans also have been reading into comments from O-T Fagbenle in recent interviews, trying to learn if his character is in fact the alter-ego of the villainous Taskmaster. Fagbenle has teased a potential romantic connection between his character and Romanoff — potentially the first such relationship for Black Widow since her love story with Hulk alter-ego Bruce Banner was left unrequited in Avengers: Age of Ultron (2015).

The Marvel Cinematic Universe super-spy actioner’s release was famously pushed back due to COVID several times, before moving to its current release date of July 9, 2021 — both in theaters and on Disney+ (with a Premiere Access fee of $29.99). The Black Widow movie will be the first feature film release from Marvel Studios since Spider-Man: Far From Home — starring Tom Holland — premiered in July of 2019.

Black Widow stars Scarlett Johansson in a return to the role of original Avenger, Natasha Romanoff for the first time since trading her life for the Soul Stone in Avengers: Endgame (2019). The film also stars Florence Pugh as Yelena Belova, David Harbour as Alexei Shostakov/ Red Guardian, O-T Fagbenle as Agent Mason. And of course, Rachel Weisz as Melina Vostokoff.

Marvel Studios is counting on Black Widow to set the tone for it’s robust Phase 4 cinematic slate. With the death of Iron Man, Tony Stark (Robert Downey Jr.), and the retirement of Captain America, Steve Rogers (Chris Evans) in Endgame, a lot is riding on the success of one of  the last remaining original Avengers with a solo project on deck. Thor: Love and Thunder (2022) starring Chris Hemsworth and directed by Taika Waititi is in the Marvel CInematic Universe pipeline as well.

Do you think Rachel Weisz’s Melina will turn out to be Taskmaster? Let us know in the comments!