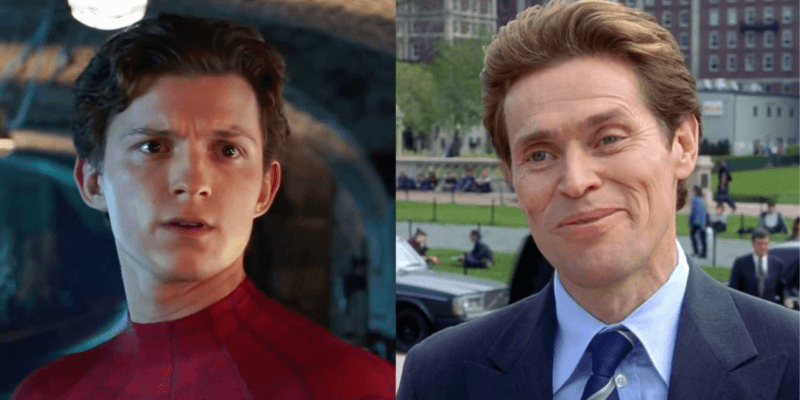 According to rumors the currently in-production Marvel Cinematic Universe film Spider-Man: No Way Home will introduce Norman Osborn as much more than a cameo from Sam Raimi’s classic Sony Spider-Man films. These rumors suggest that Norman Osborn — the Green Goblin — will be placed firmly at the center of the Marvel Cinematic Universe for years to come.

The original big-screen Green Goblin, Willem Dafoe, has reportedly been spotted on the set of MCU’s Spider-Man 3, presumably reprising his role as Norman Osborn from Spider-Man (2001).

Remember, these are all rumors. Marvel has not confirmed any of this information.

The report comes from The Hashtag Show posted that Willem Dafoe’s inclusion in No Way Home is just the beginning for Norman Osborn and the Green Goblin in the Marvel Cinematic Universe. As Inside The Magic reported last week, Sony and Disney struck a deal that will bring Spider-Man movies to Disney+. As part of this deal, The Hashtag Show is reporting that Disney has gotten additional rights to share Spider-Man characters previously exclusive to Sony — and Norman Osborn is one of those characters.

Related:Doctor Strange In the Multiverse of Madness : Release Date, Cast, and EVERYTHING You Need to Know

According to the as-yet unconfirmed reporting, Marvel Studios head Kevin Feige wanted to use Norman Osborn as the big bad of No Way Home. The new Sony/Disney deal wasn’t completed in time to make that happen, but the now in-place agreement clears the way to there being 2 versions of Norman Osborn — Willem Dafoe’s Green Goblin from the Sony “multiverse,” and a new, yet-to-be-revealed Norman Osborn in the main Marvel Cinematic Universe timeline.

According to the rumor, Tom Holland’s Peter Parker will encounter Dafoe’s Osborn in an alternate timeline or multiverse reality, and that Green Goblin confrontation will lead him to investigate the Norman Osborn of his own timeline/reality in the mainstream Marvel Cinematic Universe, who apparently already exists. The new wrinkle is that the Norman Osborn of the Marvel Cinematic Universe is not such a bad guy, at least on the surface. According to The Hashtag Show,

“He has political aspirations, makes charitable donations, and even supports The Avengers. They’re playing off the idea that it’s a different earth, and no villain or hero is guaranteed to be on the same path.”

It’s been assumed for some time that the multiverse will play a major role in the upcoming Marvel Cinematic Universe Spider-Man 3. Reports say Spidey fans can expect to see more cinematic versions of Peter Parker team up with Tom Holland in No Way Home (December 17th, 2021). The first cinematic Peter Parker / Spider-Man, Tobey Maguire and Andrew Garfield, who next portrayed the web-slinger for Sony in The Amazing Spider-Man (2012) are both heavily rumored to be appearing, despite what Holland has commented. Additionally, Alfred Molina, Doctor Octopus from Spider-Man 2 (2004), is also set to reprise his role as Otto Octavious in No Way Home.

If these rumors pan out, it could place Norman Osborn in the middle of Marvel Studios’ plans for the foreseeable future. The Dark Avengers have been hinted at in The Falcon and The Winter Soldier, with the Contessa (Julia Luis-Dreyfus) recruiting U.S. Agent John Walker (Wyatt Russell). In Marvel Comics, Norman Osborn is the driving force behind the dark mirror version of the Avengers. In Marvel comics, Osborn forgoes the Green Goblin persona and becomes the Iron Patriot, ostensibly a cross between Iron Man and Captain America. With Norman Osborn more involved in the MCU, we could see Green Goblin set up as the major villain not only in Spider-Man films but across future Avengers projects as well.