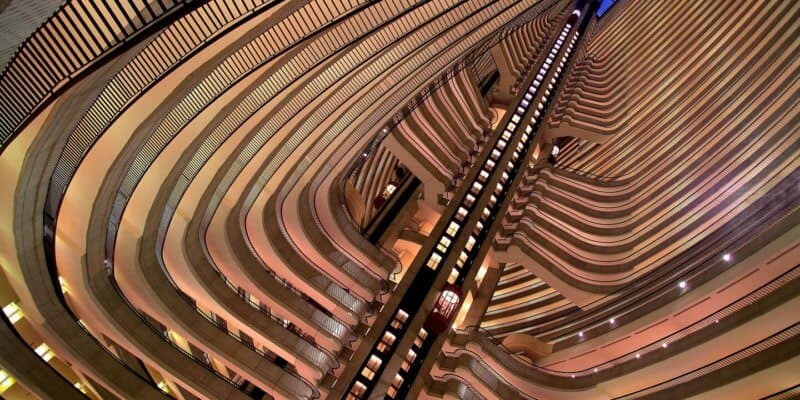 The Disney+ series Loki has definitely surprised us in ways no other Marvel series has, and not just with the introduction of the Time Variance Authority and Sacred Timeline backstory.

When it comes to visuals, the production design of this show is stunning! In the very first episode, we are transported into a whole new world, one we have not seen yet in the Marvel Universe, and get an inside look at the TVA, but nothing prepared us for the phenomenal design of the actual Time Variance Authority Building!

Did you know that this 52-story building is an actual hotel in the U.S.A?

Where is the TVA Building

While Loki and Mobius join forces in Episode 2, “The Variant,” viewers are immersed in what looks like computer-generated imagery of the TVA building but in actuality, the main shot (minus the statues of the Time Keepers) is actually real! Where is this architectural gem?

For Loki diehard fans or just fans of famous architectural structures, make your way to Atlanta, Georgia to the 4-star atrium hotel, Marriott Marquis. According to Marriott.com,

Designed by acclaimed Atlanta architect John C. Portman and constructed in 1985, our iconic hotel is renowned for its soaring atrium (once the world’s highest). Our hotel is one of the most photographed hotels in all of Atlanta.

Nate M better known as @n8creative on Twitter shared this tidbit of information after the second episode of Loki aired and showcased an incredible image of the atrium as he stated,

If youre ever in Atlanta you can go check out the real TVA downtown. Its such a stunning work of architecture. #Loki

If youre ever in Atlanta you can go check out the real TVA downtown. Its such a stunning work of architecture. #Loki pic.twitter.com/506UmoTwNU

This incredible hotel may look familiar to some, as Marriott Marquis hosts a massive pop-culture convention called “DragonCon”. This event in Atlanta holds thousands of sci-fi, fantasy and gamer cosplayers since 1987 and will return to fans from September 2 to September 6, 2021.

Did you know that this atrium was also featured in movies such as Hunger Games: Catching Fire and Spider-Man: Homecoming starring Tom Holland, Michael Keaton, and Robert Downey Jr.

I can imagine that is hotel is extremely popular already, but it is impressive to know that a place like this does exist in our Sacred Timeline!

Have you visited the Marriott Marquis? What are you excited to see in Disney+ Loki? Let us know in the comments below!