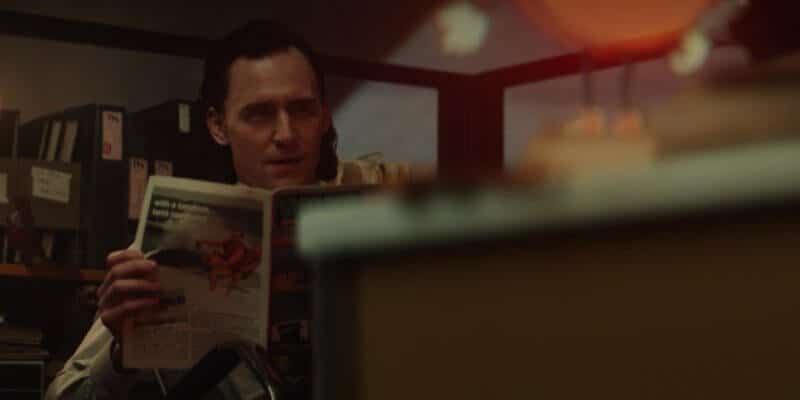 Marvel Studios’ latest foray into streaming, Loki, debuted last week to much acclaim. In fact, the MCU show’s debut — the first on a Wednesday — had such incredible numbers that it altered the entire release schedule for Disney+ Originals, including The Mandalorian.

Loki, which stars Tom Hiddleston — who is reprising his Avengers franchise role as Asgard’s God of Mischief — and Owen Wilson as MCU newcomer Mobius M. Mobius, is putting Marvel fans on the fast-track to understanding the Marvel Multiverse. This is, in large part, thanks to Miss Minutes.

We first met her on a television screen in the first episode when Loki was in line to appear before Time Variance Authority (TVA) Judge Ravonna Renslayer (Gugu Mbatha-Raw). She provided viewers with a Schoolhouse Rock-style lesson in the Multiversal War, complete with a perfect Southern accent.

When the second episode of Loki — titled “The Variant” — picks up, Loki is at TVA headquarters getting lessons from Miss Minutes herself. As she quizzes him about TVA protocol, the trickster asks Miss Minutes if she is “alive or a recording”, to which she replies, “Uh, sorta both.”

Loki director Kate Herron spoke to the Los Angeles Times about this new character, who is set to have an “interesting journey” throughout the first season of the latest Marvel Cinematic Universe series. She shared details about how Miss Minutes came to life — and it’s both hilarious and, apparently, slightly horrifying:

“It was basically like a lamp that we stuck little cardboard eyes on. She was this little lamp on suitcase wheels that we’d spin around … She’s a light because she lights the scene because the character is illuminated. Then you replace the terrifying lamp with a lovely cartoon.”

Herron also shared that Miss Minutes was inspired by a somewhat surprising franchise, Steven Spielberg’s Jurassic Park trilogy! The animated character was modeled after Mr. DNA (Colin Trevorrow), who educated Isla Nublar visitors about the science behind recreating dinosaurs like Tyrannosaurus Rex and Velociraptor in the original Jurassic Park (1993). She said:

“And I think it’s so fun because initially, we have Miss Minutes [as] kind of our introduction to the TVA. She was almost like our Mr. DNA from Jurassic Park, in that she was explaining: who are the TVA? How does the world work? What are the rules? And I think that was fun in itself. But then I think we found, as we were developing the stories more, we just kept wanting to bring her back and spend more time with her because she’s such fun.”

At the Visitor Center upon arrival, Jurassic Park Guests watched Mr. DNA  alongside Dr. John Hammond (Sir Richard Attenborough) in an educational video — almost exactly like Miss Minutes explains the branches of the Marvel Multiverse to Odin’s son (and all of the other Variants) in Loki.

You can currently catch a new episode of MCU series Loki — and look forward to getting to know Loki’s various forms, like Lady Loki and Kid Loki — on Disney+ every Wednesday. The official description reads:

Do you like Miss Minutes? Can you see the Jurassic Park inspiration behind Marvel’s latest breakout star?