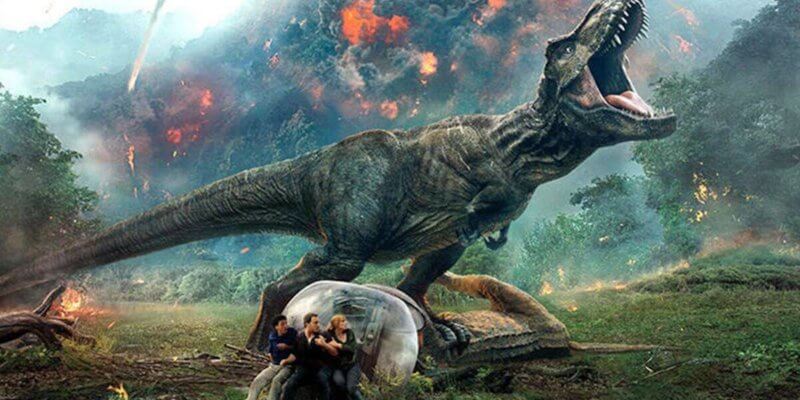 The Universal Pictures movie was delayed as a result of the COVID-19 pandemic that impacted all of Hollywood. Now, to celebrate a return to movie theaters, the team behind the third Jurassic World film has decided to give IMAX moviegoers an exclusive first look at the upcoming dinosaur movie this summer.

The five-minute footage will be shown to those who opt to see the upcoming Fast and Furious franchise movie, Fast & Furious 9, at IMAX locations beginning on June 25.

CinemaBlend shared details about the sneak peek at the sixth film in the Jurassic saga, which will hearken back even further than the first Jurassic Park (1993) — all the way to the prehistoric era that inspired Dr. John Hammond (Sir Richard Attenborough) to bring Ian Malcolm (Jeff Goldblum), Alan Grant (Sam Neill), and Ellie Sattler (Laura Dern) to Isla Nublar in the first place:

The five minute footage opens on the narrative 65 million years before the events of Jurassic Park and Jurassic World, taking audiences back to the moments when the mosquitos unknowingly harvested the DNA that would later be used to create the dangerous Jurassic theme parks. The preview will feature seven new species of dinosaurs including the Dreadnoughtus, the largest dinosaur recorded by paleontologists, said to be 85 feet long and weigh about 65 tons.

Okay, I don’t wanna brag, but I’ve seen this and it’s AWESOME! Wonder, awe, chills, terror — all served up Jurassic style. I’m amazed by @colintrevorrow [Colin Trevorrow] & Universal and what they’ve cooked up for us all as we safely return to theaters. If you wanna check it out, go to IMAX 6/25!

Okay, I don’t wanna brag, but I’ve seen this and it’s AWESOME! Wonder, awe, chills, terror — all served up Jurassic style. I’m amazed by @colintrevorrow & Universal and what they’ve cooked up for us all as we safely return to theaters. If you wanna check it out, go to IMAX 6/25! pic.twitter.com/XGObgjb1zd

Jurassic World: Dominion is expected to explore the aftermath of what occurred when Jurassic World: Fallen Kingdom (2018) ended, with numerous dinosaurs escaping the confines of the island to roam the world at large.

Little is known about the specific plot of the film, but Chris Pratt (Owen Grady) and Bryce Dallas Howard (Claire Dearing) will reprise their roles from both Fallen Kingdom and the first Jurassic World movie in 2015.

From the preview poster for the IMAX footage, it’s also clear that the very distant past will play a key role in the upcoming movie — perhaps all the way back to the amber-encased mosquitos that started it all.

Are you going to see F9 in IMAX just to watch this exciting Jurassic World sneak peek?