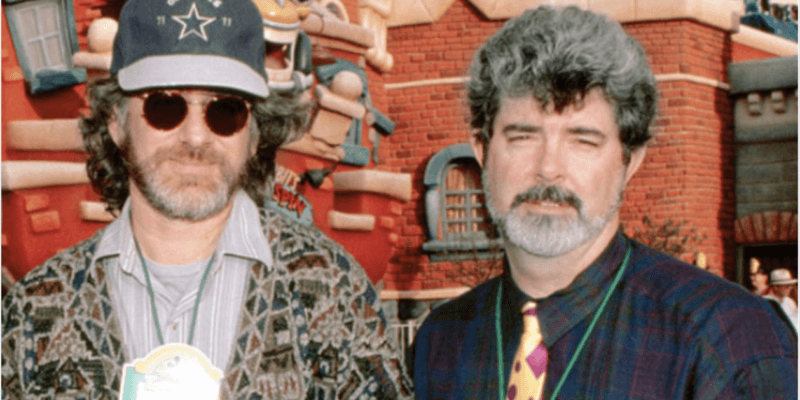 Arguably, George Lucas and Steven Spielberg are two of the greatest filmmakers of the modern age. American Graffiti and Star Wars creator Lucas and Jaws mastermind Spielberg also have a long and storied history with one another. After all, Spielberg’s Indiana Jones franchise starring Harrison Ford is a Lucasfilm IP.

Furthermore, the duo banded together to, some would say, save The Walt Disney Company during CEO Michael Eisner’s tenure in the late 1980s and 1990s.

So, given the close relationship between the two movie makers — and the fact that both have an interest in the science fiction genre (hi, E.T.) — it is a bit curious that Spielberg has never directed a Star Wars film. The reason for this? Lucas seemingly won’t allow him to.

In a resurfaced interview from 2002, Spielberg spoke to Comic Book Movie about the Star Wars saga:

Approximately 15 years before the early 2000s would have been around the end of the original trilogy era. Although the director didn’t confirm, it’s certainly possible that Spielberg was gunning to oversee the adventures of Jedi Knight Luke Skywalker (Mark Hamill), Princess Leia Organa (Carrie Fisher), and Han Solo (Harrison Ford) when the second Death Star was finally defeated in Star Wars: Episode VI – Return of the Jedi (1983).

The Hollywood legend went on to say:

“I understand why – Star Wars is George’s baby. It’s his cottage industry and it’s his fingerprints. He knows I’ve got Jurassic Park and Raiders [Indiana Jones and the Raiders of the Lost Ark]. But George has Star Wars and I don’t think he feels inclined to share any of it with me.”

Intriguingly, although Spielberg never got his hands on the Star Wars franchise’s original trilogy — Episode IV: A New Hope (1977), Episode V: The Empire Strikes Back (1980), and the previously mentioned Return of the Jedi (1983) — he was heavily involved in the final film in Lucas’s prequel trilogy.

In certain versions of Star Wars: Episode III – Revenge of the Sith (2005), Spielberg is even listed as a guest director. He assisted Lucas with a few key scenes, including the famous battle between Emperor Sheev Palpatine (Ian McDiarmid) and Master Yoda (Frank Oz).

Could Spielberg and Lucas return to Star Wars?

As of 2012, The Walt Disney Company owns Lucasfilm, which means anything could happen in the future. Marvel President Kevin Feige and Thor franchise director Taika Waititi both have Star Wars movies in the works, with Wonder Woman 1984‘s Patty Jenkins set to direct Star Wars: Rogue Squadron (2023), the next feature film in the Star Wars universe.

Who’s to say Spielberg couldn’t be brought in by Lucasfilm President Kathleen Kennedy in the future?

In the meantime, Spielberg is producing Indiana Jones 5 after giving up the director’s chair to James Mangold for the fifth installment in the action-adventure franchise. 78-year-old Ford will reprise his role as the famed archaeologist for the first time since Indiana Jones and the Kingdom of the Crystal Skull (2008).

Meanwhile, George Lucas has reportedly expressed interest in being involved with Jon Favreau and Dave Filoni’s The Mandalorian saga on Disney+, but this remains unconfirmed at this time. IMDb also previously indicated that the sci-fi guru will be writing for upcoming Rogue One prequel series, Andor, but this, too, has not been officially confirmed by Lucas’s camp.

What do you think? Should Lucas have let Spielberg direct a Star Wars movie long before now?