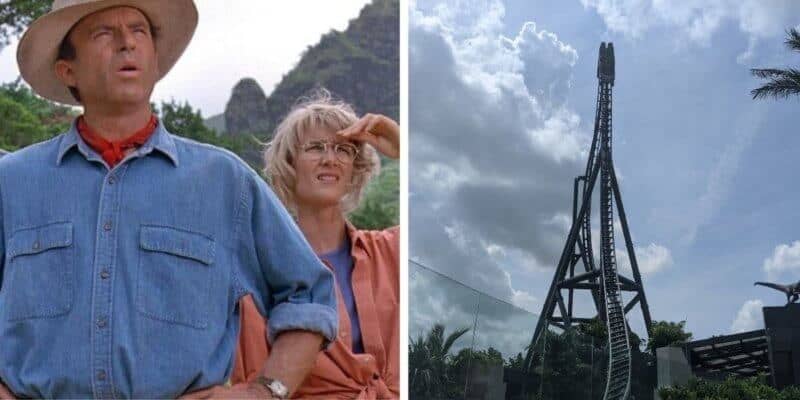 If you like all things dinosaurs, including Jurassic Park, Jurassic World, and Universal, you likely have been keeping up with the news about Universal Orlando Resort’s latest thrill coaster, Jurassic World VelociCoaster.

VelociCoaster is currently offering Annual Passholder previews until May 5, where Guests can join Owen Grady (Chris Pratt) alongside a raptor run with Blue and the rest of the gang, in a story-telling roller coaster that allows Guests to experience G-force, carnivorous raptors, and multiple launches, all while exploring the new InGen experience.

One of the most spectacular aspects of VelociCoaster is surely the queue. Guests can truly feel as if they are inside International Genetic Technologies as raptor animatronics come to life around them. If there is one thing we have learned from Universal Orlando Resort after the creation of the Wizarding World of Harry Potter, is that detail is key. So, aside from the giant show-stopping elements inside of the Jurassic coaster attraction, there are also smaller details which not only heighten the immersion, but pay homage to where the franchise began.

Jurassic World may be the most popular film series about dinosaurs at the moment, but the Jurassic franchise began with Jurassic Park. In 1993, Universal released Jurassic Park starring dino experts Dr. Ian Malcolm (Jeff Goldblum), Dr. Alan Grant (Sam Neill), and Dr. Ellie Sattler (Laura Dern). Considering Universal is bringing the team back for Jurassic World: Dominion in 2022, tieing both ends of the Jurassic franchise together, it makes sense that VelociCoaster would reference the original movies.

So, when you are going through the queue, you can see books written by Grant and Malcolm in the queue! For many fans, this will be a fun discovery and tribute to the film, and again, helps to show that Universal is treating the Jurassic franchises as a single entity, especially in their Parks, where attractions for both films are placed next to each other, regardless of timeline.

Please remember, VelociCoaster officially opens on June 10, and if you try to ride while Annual Passholder previews are going on without a UOAP and a valid confirmation email from Universal, Team Members are in place to turn Guests away as all three days are at capacity.

What details do you hope to see on Universal Orlando’s VelociCoaster?

If you want to be one of the first to ride VelociCoaster, you should look into booking a Universal Orlando vacation! With Universal Studios Florida, Islands of Adventure, Volcano Bay, and CityWalk all available for Guests to enjoy on Universal parks property, there is something for everyone — including Halloween Horror Nights and Mardi Gras! Plus you can also visit Disney World. Click here to let the adventure begin today!